An Obstetrician in Papua New Guinea says complex societal issues such as  poor family planning, limited infrastructure, a financially starved health system and domestic violence, are behind a rise in maternal deaths.

A recent report by ChildFund Australia has found 1 in 120 women are dying during pregnancy and childbirth and they are 35 times more likely to die in labour than Australian mothers, with the situation becoming worse over the past five years. 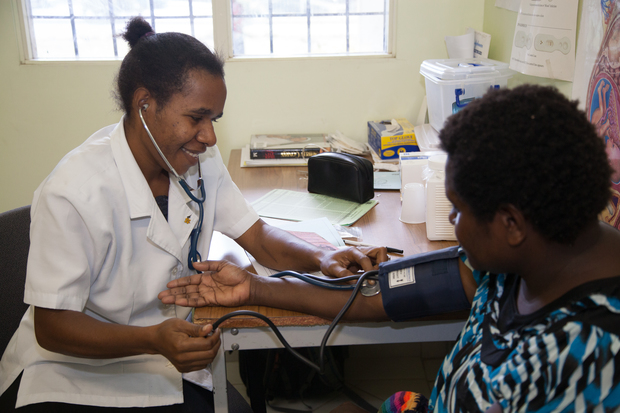 MARY ROSE BAGITA: That's a really big question because we really need a lot of things improved and changed in order to improve our maternal mortality rates. We know that we could significantly improve our maternal mortality rates if we could address family planning and also improve our basic emergency care at the time of birth and delivery. We've tried over the years to try and push for family planning for families to reduce the number of children they have. But it's not going the way that we would like it to go. The uptake of family planning is not satisfactory yet. And with regards to emergency training for our health workers who do the deliveries, we've also had a lot of effort put in by our partners to train especially our lower level health workers to up-skill them in their skills in emergency obstetric care and all that. So we're hoping that whatever skills they've learnt, they've taken back to their village and to the district level so that will improve things as well.

JENNY MEYER: It sounds like it really is very tough for women living in the rural areas?

MRB: It's really tough. Because not only dealing with this but actually gaining access to the health facilities themselves, it's quite difficult. Because you know that most of our people live in the rural health areas. And infrastructure in the rural places is not that good. So most of our places are accessible by air only and the road condition in provinces that have roads available is quite poor.

JM: You're working there in Port Moresby, you must see the most unwell pregnant women I imagine, sometimes is it too late to help them and their babies?

MRB: Yeah that's right. Most times it's too late to help the women and their babies. Because we are based in Port Moresby but we also receive referrals from the surrounding provinces. It's access mainly. So by the time the women are referred and they reach us it's usually too late. So we try our best to do the best we can to save mother and baby but in most instances it's too late.

JM: It's very sad isn't it? And why do you think it's just got so much worse in the last five years despite there being so much investment in trying to train people up, trying to get these more dispersed health clinics up and running and really some of them have got no running water or proper toilet facilities so they become a liability too. Why has it got worse in the last five years?

MRB: One of the reasons is our health system and financing the health system. We actually rely a lot on our donor partners and development partners to help fund our health delivery system. And although the government has put in a lot of money to the healthcare system, we don't really seem to see where it's going. Then there's those issues of procuring drugs and trying to get them to places where they're supposed to go. It's really a complex issue. So even though we're told that theres' money available and it's a lot of government money available to help the health system, unfortunately those at the health facility levels and even us in Port Moresby, we don't seem to see the effects of that money. So yeah it's all very complex.

JM: And just finally what role does violence and domestic violence towards pregnant women come in to all of this? You know it sound like, we know that violence is a problem in Papua New Guinea anyway, and we know that there are problems health care and the provision of maternity care, but when those two things combine it just must be terrible for the families involved?

MRB: Yeah that's right we do have high levels of domestic violence. So because a lot of our society is a patrilineal society so the husband is more dominent. And then a lot of our women who from the rural areas they are not that well educated so they depend a lot on the husband for their socioeconomic status. So coming from a culture where there's male dominence and if the woman is not well educated she can't speak up for herself, she doesn't have much control over what she can do. So that adds on problems to pregnant women. Because if their husbands are not able to help care for them in that pregnancy and then on top of that there's domestic violence in the family then it obviously has poor outcomes for the mother. Because their health seeking behaviour is hindered I'd say. They feel like they don't have anywhere else to go because the person who's supposed to be looking after them is not really looking after them.

JM: And it also must be poor outcomes for the child and the children?

JM: It sounds like a very distressing feild to be keeping on going every day when there's so much more that needs to be done but it does sound like those people who are working in those rural areas, they need all the support they can get, would you say that?

MRB: That's really true, we need to support our rural health workers and our rural population much more than what we are doing at the moment.