Call for peace and compensation after brawl in Samoa

The Samoan community is still reeling from last weekend's unrest on the island of Savaii.

At least fifty extra police had to be deployed to stop the dangerous fighting between a group of young men and boys from two villages, Salelavalu and Salelologa.

Two suspects were later handed over to the police by Salelavalu village matais and have been charged with grevious bodily harm. 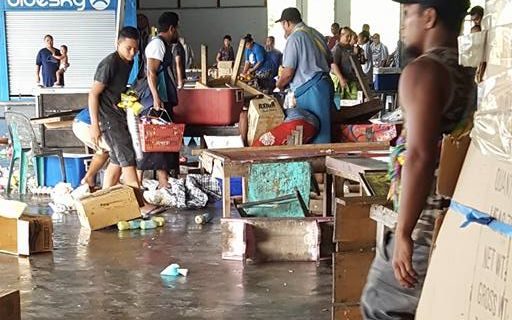 A scene from the damaged market at Salelologa Photo: Facebook

Samoa police say the fighting stemmed from an argument that allegedly began during an alcoholic drinking session.

The fighting between the two groups later spilled into Savvaii's main market during its usual busy Saturday business hours.

Women had safety concerns for their children, as online video showed stallholders and customers being terrorised, with chairs and tables being thrown.

Video footage on social media also showed a man pointing a gun to the head of a man from another village who was among those beaten up.

A family home at Saletagaloa was also reportedly burned down, and another property left stoned with broken windows and bullet holes.

"Look at all this mess. These kids have trashed all the stallholders’ things and no one knew what is going on with these youth but people's food they were selling has been thrown everywhere."

"We don't feel safe in our house. We heard gun shots and rocks were thrown through the house and our car shot at. I said to them why are you involving us in this?"

Public movements were restricted after roadblocks were put up, as extra police were deployed from Apia to help local officers.

Police superintendent Aupa'a Logoitino Filipo said two men, aged 21 and 36, are understood to have featured in video footage of the unrest in circulation on social media, are in police custody in Apia awaiting a court appearance.

Our correspondent says local businesses have been left thousands of tala out of pocket with the damage.

Autagavaia Tipi Autagavaia says it will have a huge impact on tourism, as the fighting leaves people feeling unsafe.

"People are just condemning what they saw on the video, and especially what they did, like blocking the road and church ministers from the two villages trying to calm things down. And you can hear in the background people throwing rocks, people swearing and gunshots and so it is not really painting a good picture of Samoa."

The weekend brawl has prompted regional calls for efforts to maintain peace among Samoans.

The Minister of Pacific People's in New Zealand, Aupito William Sio, says the fighting reflects on Samoans as a collective.

He says it is disappointing that this news comes when Samoa Language is being celebrated in New Zealand.

Aupito says that this week's theme is kindness given, kindness received.

According to him, it is everyone's responsibility to curb violent behaviour especially among youth.

"It requires patience and requires constant reinforcement of our culture and language as a strength and so when you go back to the theme, alofa mai nei, alofa mai taeao, it reinforces that what we see in the islands is a practise or behaviour of a by-gone era that does not fit with modern day society."

Tagaloatele Peggy Fairbairn Dunlop says that it signifies a breakdown in the family and village structure.

Tagaloatele says fighting, guns, throwing rocks with neighbours doesn't adhere to core Samoan values of love and respect for each another - something many Samoans take pride in.

An ifoga or traditional apology has already taken place in a bid to end hostilities between youths of the villages.

Some of the businesses affected are seeking compensation.