Fiji's government says  seasonal work opportunities in New Zealand are 'making a real difference' in the lives of Fijians who are participating.

Around three hundred Fijians have been working in New Zealand's horticulture and viticulture sectors as part of the Recognised Seasonal Employer, or RSE, scheme.

That's just a small number of the overall 11,100 Pacific workers who were in New Zealand as part of RSE this season, and far less than the number from countries such as Vanuatu, Samoa and Tonga.

The Minister of Employment Opportunities, Productivity and Industrial Relations, Jone Usamate, spoke to Johnny Blades about Fiji's involvement in RSE. 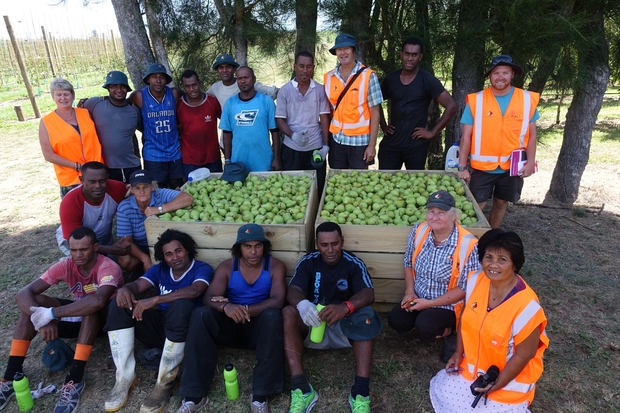 JONE USAMATE: We hope that we can get more numbers going to New Zealand, but we know that there is a cap in place, so that also depends on the policies of the New Zealand government. Our aim is always to increase (the numbers). They've got a big pool that is standing by, in our work credit pool. People have been vetted by their communities and have done medical assessments and fitness assessments, so they're standing by ready to join in the opportunities either in Australia or New Zealand.

JOHNNY BLADES: So there is strong demand among people in Fiji to join this kind of work?

JU: Oh yes. we have people in rural areas who will enjoy the opportunity to go to Australia or New Zealand to earn some money and go back to their communities.

JB: You were in New Zealand not long ago and obviously looking at Fiji's participation in the RSE scheme. What did you think, are there any issues the workers have with their working conditions or anything?

JU: There's always issues of communication and giving pastoral care to the workers that we send. We know that the companies and the farms that do take on Fiji workers have some element of pastoral care. There's always an element of communication difficulties. I think the great advantage of people from Fiji is that English tends to be something that most people understand or speak. So while there are some difficulties,  there are some distinct advantages too for the people coming from Fiji.

JB: What about deductions? Some contractors or companies in New Zealand enforce a lot of deductions on the RSE workers' pay packets. How do you see it for people from your country?

JU: Well our objective always is to try to make sure that workers save as much money as possible, which means that we'd like to see how well they can reduce the deduction which includes the cost of transportation, the cost of accommodation. I think those are the major ones - and it varies across different parts of New Zealand, it's also an element of supply and demand - and also the cost of remittance. So those are three issues that we've been discussing with the New Zealand government. We also had a conference last year in New Zealand with the other Pacific countries where we also discussed these things. So the government is also of that opinion that we try to see how we can reduce deductions as much as possible so they can save as much money as possible when they return home.

JB: Did you find that the companies are receptive to that, to maybe looking at ways to reduce deductions?

JU: Yes, we found them to be quite receptive, the ones that we talk about. we've had some good dialogue with the companies that are taking workers from Fiji.

JB: Are the results of the money earned evident back in Fiji in the rural areas where these workers are coming from?

JU: Yeah, we have not done a full survey, but we have some anecdotal examples of people really using the money well. Some have built homes, some have bought machinery, some have started farms, small business. So we have anecdotal examples of people really doing well with the money. But I think we will be looking at a full survey so we can gauge the benefits from participation in the RSE programme.