Rugby union is on the rise on Guam with a former prop from New Zealand's Hurricanes Super Rugby franchise leading their efforts to grow the game.

The US Territory is home to about 160,000 people and last week the national men's team thrashed Brunei and China to lift the Asian Division III East title. 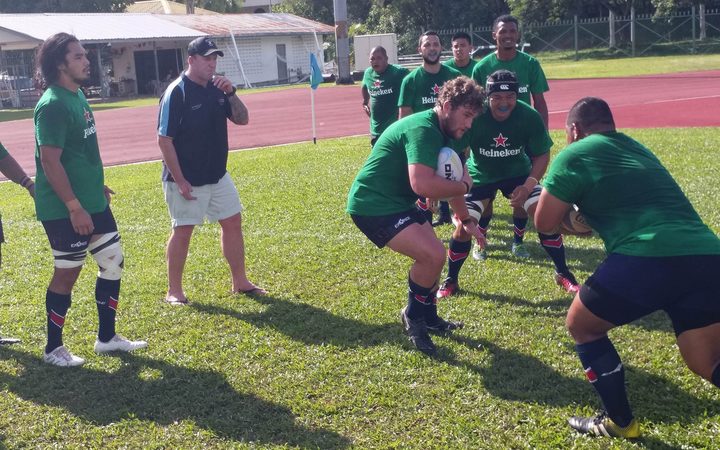 TONY PENN: They're so keen and whatnot but they've only got a population of 160,000, but funnily enough it's one of the most popular sports in the high school system. As you know it's an American territory so they're pretty much dominated by American sports: basketball, baseball and American football and also soccer is pretty big up there but rugby is really really popular amongst the school system over there and the problem they've got when they leave school (is) they all bugger off to colleges in the mainland in America or they just join up to the military so they lose that transition phase from school rugby to senior rugby is pretty much non-existent. They don't have a club rugby scene per se, they have a tournament once a year, a tens tournament, and they have an alumni series, which is playing for their old schools, and they probably play like three games a year so they really box well above their weight for a country that doesn't have a senior rugby competition.

VINNIE WYLIE: How have you found yourself coaching the team? You had a long career here in New Zealand domestically, Super Rugby etc so how did you find yourself with Guam?

TP: I caught up with an old rugby coach of mine, New Zealand Maori selector Willie Hetaraka, and he was in Taranaki on some business. I just caught up with him for a coffee and he said, " do you want to come up and give me a hand to coach the Guam national side?" and I'd never even heard of Guam and didn't even know where it was. I thought yeah I'd go up and anyway one thing led to another and he sort of chucked it in and they asked me to stay on and that's was coming up now for about six years so that's how we ended up in Guam...but I just love giving back to the game and especially to a bunch of guys who are so keen and are actually passionate about the game and wanting to learn. It's really satisfying actually and it's just real grassroots rugby at it's best, I couldn't describe it any other way...I usually come to Guam about a week or two weeks before we go away, get the guys off the beaches and try and rustle a team together and we work pretty hard for a week or two and then we go away to the tournament and back I go. We're just trying a few new strategies that try to develop the game a lot more. I'm going to look at going down a little bit more often and running some coaching clinics for the coaches and just up-skilling the people as much as we can. Like I say, it's an American sports dominated territory so as much as they're really keen they're limited to volunteers. There's a few ex-pats up here that have got the game going on the island - actually set rugby up 15-20 years ago - and they do a lot of work but they can only do so much so just trying to develop the game even more and trying to get the high school kids to keep continuing playing at a senior level so that's work in progress so we're looking at doing that moving forward.