A charity has distributed more than 2200 donated new and used bras to women in Fiji.

Project Pasifika held their second 'Hooter Holder' event in Nadi last week, where bras donated from Australia, New Zealand and even Europe, were given out.

The organiser of the event, Tracey Johnson, says she started Project Pasifika as a way of donating clothes to people in Fiji after heavy flooding in 2012 and through that work she found women there were desperate for bras.

She told Tim Glasgow that last week's event was successful. 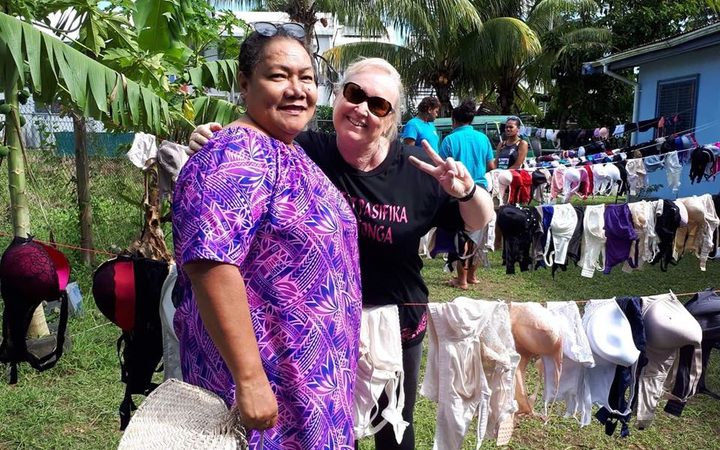 TRACEY JOHNSON: We managed to distribute around about 2300 bras to the ladies in the Western area of Fiji. But in saying the Western area, we also had a lot of ladies come from Sigatoka, Suva, Baa, Lautoka, we had a few come out from the islands on their days off from work. So we had the ladies come in to Nadi and they come in and they're allowed to have two for free. And we have chats with them and we hold raffles and we try and do a bit of fundraising as well.

TJ: Struggled to afford. I went to a second hand shop. She took me in and they range in price from $F20-$F25 and sometimes up to $F45. And they're second hand bras that are brought in from Australia. And I looked at them and said "these are new?" and she said "no they're second hand". And I said "25 Fijian dollars for a second hand bra" and she said "yeah". And I was just blown away and I said "no that can't be the case" and she said "yeah it is". And over time I found a lot of the ladies asking "have you got any bras?" Hmm OK, so [I] started thinking and then just started thinking of this project and just started thinking what if I bring in some and see how it goes. And I had heard stories about ladies who had been doing it  and they were bringing in, say, a suitcase full and handing it to the staff, the house keepers... just to just take back to their villages for the ladies. And I thought we could do this on a bigger scale and the reason that I wanted to make is free I think it is nice if the ladies can have something for themselves. You know it always gets put to the back of the budget, it never happens. And when it does it costs a lot out of their weekly wage to buy a second hand bra. They weren't in great condition.

So that's another thing with my bra drive, I've said second hand, but in great condition. But of that about 23000 we've done about 30 percent of the bras were brand new. I had one lady come in the other day, she didn't want to be sized, and she was a bit shit. A widow - with three children. So I said "come with me". Then she started to open up and said "yes, actually I would like to be sized", because she had no idea what size she was. We fitted her up and give her three. It was almost like she walked in with her shoulders down and walked out with her shoulders up. And she walked out with a smile on her face and said "now I have three, and I don't have to worry about the money".