As more fissures appear on Hawaii's Big Island, the number of residents evacuating is rising as new lava flows threaten to destroy their homes.

The biggest tremor was a 6.9 magnitude quake that struck over the weekend and was the strongest recorded in the state in over 40 years. 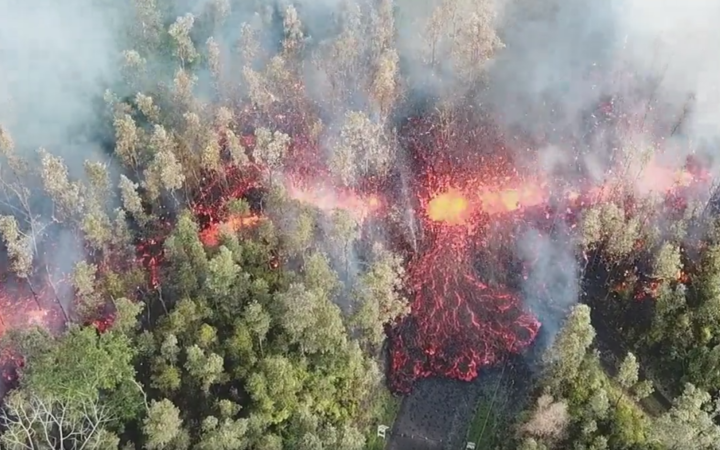 Kilauea is located on the south eastern side of Hawaii's Big Island, and has a reputation as one of the world's most active volcanos. Close to 3,000 residents in Lanipuna Gardens have now been told to evacuate after some 18-hundred residents of Leilani Estates were told to get out. Officials report there are now at least 14 fissures now and dozens of homes have been destroyed by hot lava. People are being warned to heed safety warnings while scientists monitor the eruption more closely to get answers. A geologist from the US Geological Survey Janet Babb says that the situation is fluid as seismic activity is still being recorded.

"We are learning things, and so one of the things for instance is we are collecting lava samples, samples of each fissure as they have erupted and so those samples have now been analysed and so we are now beginning to understand more about what is going on below the ground."

Local communities are stepping up to help volcano affected residents as Civil Defense opens a new recovery information and assistance centre at a local church. Church secretary and business manager, Bernice Walker, says they've been inundated with hundreds of people.

"There is relief their stuff got taken out, there is frustration because things don't happen quick enough, there is happiness because loved ones are safe, there is worry because animals are left behind. I mean there is every emotion under the sun that you can think of that happens in times of crisis like we are having."

Bernice Walker says the church is happy to be able to connect people to get the help they need.

"It is open to all the victims who need information, a place to stay, doctors, rides to go somewhere, information as to say who might have a room or who may have trucks to haul things out, things like that."

The Sacred Heart Catholic Church in Pahoa will be open between 9 and 3pm weekdays. One fissure appeared two kilometres from the Puna Geothermal plant, that had 60 thousand gallons of a highly flammable liquid on site. Hawaii County Civil Defense Administrator, Talmadge Magno, has assured worried locals.

"As I said earlier, there is no flow, no lava flow. It is just the fissure."

But he admits there is no sign of the volcano's activity slowing down with a lot of magma underground. The land size now covered by the new lava flow is said to equate to 100 football fields.  Many roads are still closed and there are no fly zones put in place given the toxic gas sulfur dioxide as well as the lava flow that continues to pose a danger. Residents who are allowed to return to check in on their properties are being asked to adhere to strict instructions by authorities.