Police in Papua New Guinea's Hela province say five more people have been killed in tribal fighting in the capital Tari in the past week.

Tari has been the focal point for a surge of deadly tribal violence in recent months.

Conflict between tribes was exacerbated by mass displacement of Hela communities caused by a magnitude 7.5 earthquake in the province two months ago.

But he told Johnny Blades fighting tribesmen remain very difficult for both their leaders and police to control. 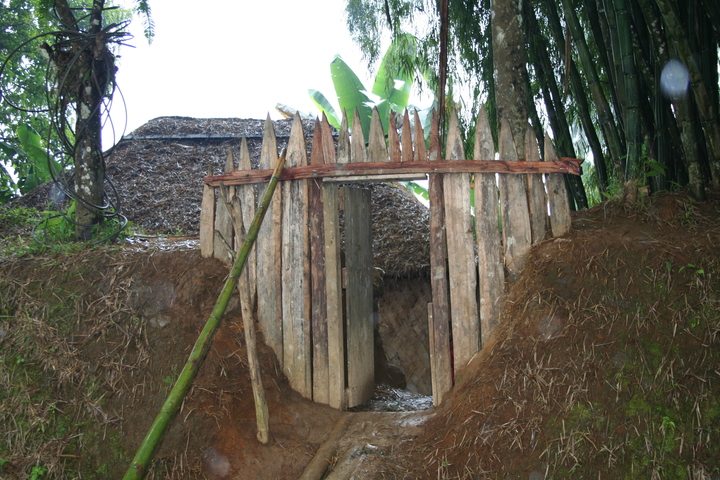 The spectre of tribal fighting is a constant in Papua New Guinea's Hela province where villages are typically protected by trenches and tightly guarded gates. Photo: RNZI / Johnny Blades

JOHNNY BLADES: Last time we spoke, you said there were going to be some reinforcements coming, maybe from Mt Hagen?

TL: Yes, yes. We got reinforcements already, and we had enough policemen on the ground,. But you know, last time I report to you, I said they (the waring tribes) have no fighting ground here. They're playing a 'seek and hide' game. When they have a chance of a strike, they go ahead and strike. That's the sort of a game they are playing here, outside of Tari town. Outside the villages, they're doing that. They're playing a 'seek and hide' game.   They're not coming straight to the fighting ground, they're not doing that, but they are hiding and once they're shown their enemy, they make a strike.

JB: It makes it very difficult for the police to control?

JB: Can you get the leaders of the tribes together to try and negotiate some sort of truce?

TL:  Yes, yes, we did. While we were bringing all the leaders together and we were discussing about how to resolve the matter, how to solve the problem, while we were talking, some of these men, they went back of us, and they killed five of the enemy tribes.

JB: Coming after all the earthquake activity, it's very difficult for local people, they must be fearful.

TL: Yes, people are living in fear. And some people, they've already left for outer villages, other provinces, they won;t hang around here. Some people have already left. Some people are here and.. you know, it's hard for us to control these people.  "We leaders are trying to resolve the problem, and we are dsicussing the matter. But some of the men, they came behind us, behind the leaders, they came looking for the men and they killed the men... it's hard too for the leaders to control their men.