Vanuatu Govt gets multiple offers of land for Ambae victims

The Vanuatu Government says it has received a number of offers of land to accommodate Ambae Islanders forced to move by the latest volcanic eruption.

The government is encouraging the about 11,000 Ambae islanders to leave and has had cabinet ministers speaking with landowners and chiefs on close by Maewo, Santo, Pentecost and Malakula.

The minister of internal affairs, Andrew Napuat, spoke with Don Wiseman about the evacuation plans. 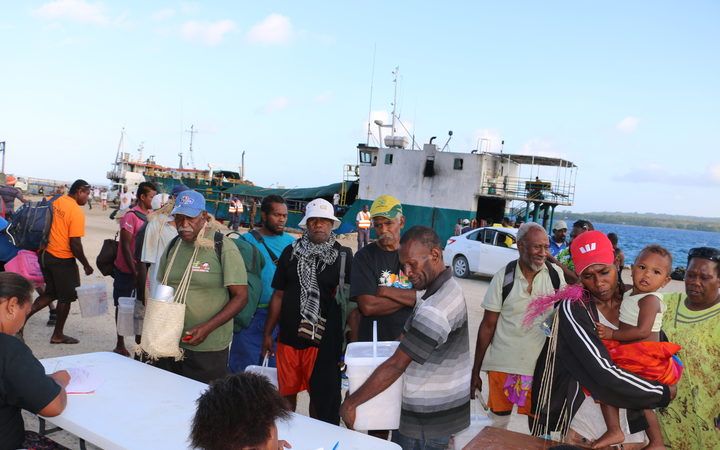 ANDREW NAPUAT: What the Council of Ministers did was declare a state of emergency over Ambae for three months and it mandated the National Disaster Management Office and the police to evacuate the people of Ambae to the other locations and to other islands. So basically what we are doing at the moment, the government is doing at the moment, is encouraging people to co-operate with the government with this relocation. Different ministers have gone to different islands, nearby islands, like Pentecost and Maewo and Santo. Even the people of Malekula have also come forward to make an offer to the government that they're ready to accommodate the people of Ambae,, and so basically what we doing is encouraging the people of Ambae to do is to co-operate with us and move out of the disaster areas and move to the sites that have been identified by the government with the NDMO.

DON WISEMAN: Have you identified land? Have you got land set aside on these neighbouring islands that people can start moving to?

AN: yes we have already started and we have identified some site for the people to be moved into those areas. And as you know once a site's identified there needs to be consultation and agreement, the consent of the people, the local people and the chiefs and everybody. And there has to be an evacuation and relocation plan that needs to be followed through.

DW: So the government will acquire this land and then you will, what, onsell it to the people from Ambae?

AN: At the moment that's not yet been finalised but people have offered to accommodate the people of Ambae, I mean the communities and the chiefs of these islands have offered to accommodate the people of Ambae during this emergency state and allow for those other arrangements to follow through once those people have been relocated. But as you know it could be just that the government steps in and does the acquisition from day one, but on the other hand, the people have also realised the necessity and the need to step in and assist, so it is going to be an arrangement that is going to take, to involve, a lot of understanding from the people and the government on the situation, because at the moment the government is not only responding to the situation on Ambae. There is Cyclone Hola that also affected two or three of our provinces and that is also ongoing, so it places us in a situation where we really need to manage the response and the early recovery plan for both disasters.

DW: There will be a lot of people presumably on Ambae who just do not want to leave. Do you have any idea at this stage just how many might want to go?

AN: At the moment I think most of them have realised they need to move out of the affected areas. Some have decided to move to the other sides of the island which are not really affected by the volcanic ashfall, but again it depends on the awareness that is going to be given and the government will provide them with all the necessary information that they need to know about the future situation of Ambae, and also we want to encourage them as much as possible that the volcanic situation on Ambae is sometimes very hard to predict what is going to happen and so it is safer for them to move, and I believe most people will move out of island, if not more than 80 percent, maybe 90 percent will be willing to move, voluntarily, if the government provides a site for them to relocate to .

AN: Not really. We are still more closely monitoring the situation. In terms of the health of the people I think the most important thing at the moment is water that needs to be provided and there have been supplies to the island and some relief supplies but there are no serious health issues at the moment, although we might be getting some reports in the coming days or weeks through the health and nutrition cluster. The government will be properly informed once the health and nutrition cluster conducts its own assessment.

DW:  Do you have some sort of timeline in terms of how long it is going to take to get these people off Ambae?

AN: Like  I said earlier on the government declared a state of emergency over Ambae Island and gave us three months to do all that needs to be done, which is complete a detailed response plan and then for relief agencies to identify relocation sites and then come up with a response plan and everything. And so that's ongoing for the moment, and so from April to June we will be able to respond in the short term approach and address some of the immediate and urgent issues that need to be addressed and then of course we will have an intermediate term from July until December 2018, and from 2019, 2020 onwards we will be focussing on the longterm plans of what needs to be done.

DW: It  had been reported that you might be looking for foreign aid donors to help with the movement off the island.

AN: That's correct. The Council of Ministers also made a decision to launch an emergency 'Flash' appeal and that is ongoing at the moment. Like I said before we have been affected by two disasters - Tropical Cyclone Hola and now the Ambae situation. It is a very challenging situation for us and so we have been calling on assistance from our development partners and the regional agencies.