Geopolitical analyst looks at UK's move towards the Pacific

An academic says it remains to be seen what the impacts of the United Kingdom's attempts to reconnect with the Pacific will be after a signifcant period of being less engaged.

Britain has just announce its plans to open new diplomatic posts in Samoa, Tonga and Vanuatu at the Commonwealth Heads of Government Meeting in London.

Jenny Meyer asked Professor of Comparative Politics at Victoria University of Wellington Jon Fraenkel what he thought of the move. 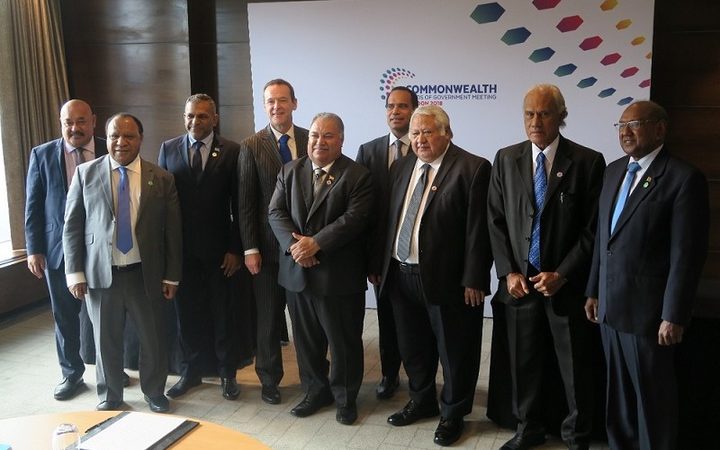 Pacific leaders at talks with the head of Britain's Diplomatic Service at the Foreign and Commonwealth Office, Sir Simon McDonald. Photo: Government of the Kingdom of Tonga

JON FRAENKEL: You need to see the reorientation of British foreign policy in the context of Brexit. Since the late 1990s - early 2000s Britain has diminished its presence in the Pacific, shutting High Commissions in places like Tonga and ramping up its European Union connections with the region. Now clearly with Britain departing from the European Union there's scope for some degree of reorientation and re-opening some of diplomatic links with some of the Pacific Islands that used to be very very close to the UK. Of course Tonga and Vanuatu are former British colonies. Vanuatu was a condominium jointly administered with the French. Samoa was never a British colony, but never the less Britain has had strong links with the Pacific region dating back to the 19th century.

JENNY MEYER: How do you think this will benefit the Pacific Islands themselves given that really the UK is now not going to have the weight of the European Union behind it?

JF: It's certainly going to be interesting. I think one of the things to watch most closely is the Fiji sugar industry. Because of course Fiji had its sugar exports protected under the Lome and then Cotanau Conventions so that it was paid a higher preferential price. But most of that sugar actually still goes to the Tate and Lyle factory up the river Thames in the United Kingdom. Now with Brexit it's still unclear exactly what the new pricing regime will be for Fiji sugar. Will Britain want a sort of tariff free policy, in which case sugar cane is more likely to be imported from places like Brazil, Thailand, or will it seek to protect its relationship with its former colonies, as it used to do before joining the European Union under the Commonwealth Sugar Agreement. That's going to be important. Also trade linkages with places like Papua New Guinea are I think worth watching.

JM: So that's the trade angle, what about the security issues, that does seem to be a word that keeps coming up, not just cyber security but in general. And I guess there's also this kind of back story of possible links ramping up between China and Vanuatu, although nobody's really clear on the facts of that?

JF: Yes I think one has to read some of these stories that are coming out with some degree of caution. All the hysteria about the Luganville wharf that Chinese EXIM Bank loan paid for the extension of, the claims coming out in Fairfax news that this is going to be a Chinese base, I look at those with considerable suspicion. I think if China wanted a base in the Pacific it's much more likely to start a naval base in the Pacific, it's much more likely to look at a closely allied Fiji, which has splendid port facilities in Suva or Papua New Guinea's Lae wharf, or Port Moresby. Of course Tonga is very indebted to China and has a deep water port in Vava'u in the country's north. But I don't see any clear evidence that China does look for a port in the Pacific. Yes it's opened ports, in Djobouti, it's got an arrangement where it's got a lease on a port in Sri Lanka, but those are on its main trade routes to Europe and the Middle East. It's not clear that the Pacific plays such an important role strategically. What I see in the Pacific is Chinese expansion in trade, in capital investment, in mining and construction, not necessarily some plan to establish military bases across the region. But we'll see.

JM: The other thing that seems to be coming up more, really an issued being pushed by the Pacific Islands themselves at the Commonwealth Heads of Government Meeting is the issue of climate change, its links with you know repeated disasters in the form of cyclones, the sea damage and rising sea levels, as well as ocean pollution from plastics and over fishing. What are your thoughts there about the role of the UK as it looks towards the Pacific?

JF: Well I think the Pacific Islands over the last five, six, seven years or even longer have been pressing issues of climate change, particularly the low lying atoll states in the Central Pacific, like the Marshall Islands, Tuvalu and Kiribati have put this at the forefront of their global diplomacy. And quite successfully, they've managed to gain a higher profile and of course these are countries that are particularly to be affected by rising sea levels.

JM: Really it's only another 12 months to go until Britain does leave the EU, what do you expect to see in terms of a practical difference to the Pacific with this warming of the relationship from the United Kingdom as it tries to reclaim its foothold in the Pacific region?

JM: So you think really it's a bit of a token move, is that what you're saying?

JF: Well it's an attempt to ramp up a diplomatic presence which is I suppose a good thing after an era where Britain has withdrawn. But I don't really see the connections with the Islands States figuring in a major way in British foreign policy in the future. It's too far away and its interests aren't there.