Fiji braces for another cyclone

People in Fiji are braced for another cyclone just a week after Cyclone Josie killed six people.

Two more people were killed at the weekend after a week's worth of heavy rain lashed the west and north, inundating towns and villages. 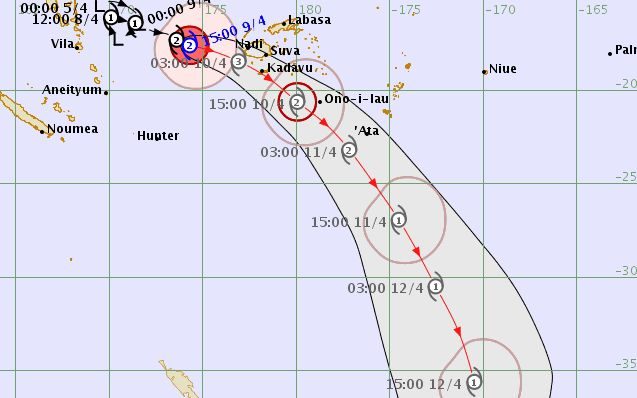 Fearful, frustrated and fed up ... that's how many people are feeling ahead of Cyclone Keni - due to be closest to Fiji around midday on Tuesday.

But people are so engrossed coping with the floodwaters, the impending cyclone is just another worry to add to many.

The local charity FRIEND has been helping get donated goods to the flood-struck and its director Sashi Kiran says people are finding it tough.

Sashi Kiran is worried about people with chronic diseases who've lost all their medication in the floods and her charity is planning medical clinics once the weather's abated.

She says creeks that have never flooded before have burst their banks from Labasa to Sigatoka and houses have been inundated under the deluge.

Ms Kiran says food, water and hygiene are set to be an even bigger problem after Cyclone Keni.

Fiji's all important sugar cane crop is nearly ready for harvest but Cyclone Keni is forecast to bring more rain and wind to western Fiji where most of the cane farms are located.

Pushp Dass who represents cane growers in Rakiraki says the crop's probably down by a third already - either uprooted or flattened after last week's bad weather..

He says growers will be looking for subsidies or a special cane payment once the bad weather's over.

"They can't do anything at the moment because of waterlogged farms because the rain has hardly stopped since Easter weekend. Mentally they are very disturbed but it's all natural. We can't do much about it."

Sulueti Waqa was at the market in Labasa stocking up before the cyclone.

She says prices for some items have nearly doubled.

He says people in the area are feeling it badly and he says the constant flooding's costing him money.

The 200,000 dollars worth of new gear was sitting in a container on the riverbank.

Mr Nagan says the river needs regular dredging and drains fixed up to deal with the increased flooding.