According to the US Geological Survey, the quake was centred on land at a depth of ten kilometres in Pomio district, 144 kilometres east of Kimbe (kim-bay).

It's the same area around the south east coast of New Britain where a 6.3 quake hit on Monday, as well as a 5.6 quake three weeks ago. 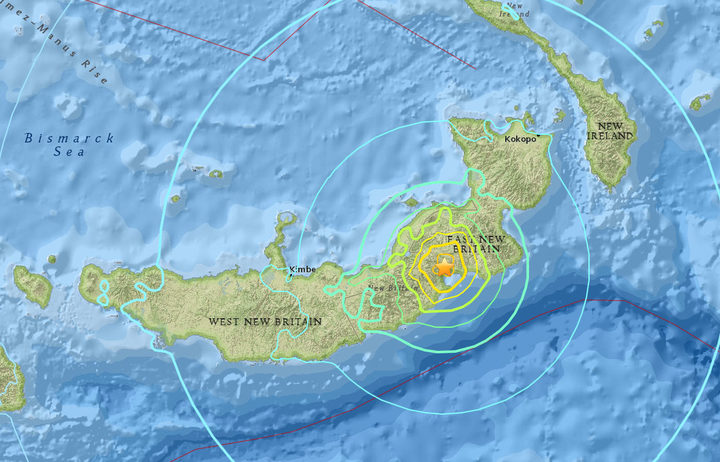 East New Britain residents have spoken of a quake that lasted minutes, causing houses to shake violently and items to fall off shelves.

A man in the Warangoi sub-district, Clement Tongor, says people are staying out in the open for fear of being harmed by landslides.

"It was a very, very big earthquake every one of us had to run out of our houses, because it continued for some minutes. But everyone has stick to one place (in the open) because we don;t want to move out, because we find we might get into some problems with landscapes and all this. So we are just waiting... because we are having small ones coming up."

Alois Gonggi is in Bago village in Pomio's central inland region, where the quake was felt strongly, although according to him no great damage was done.

He says people aren't too fazed by the quake

"They are accustomed to this, because we live in the volcanic area. Frequently we have these earthquakes, so they're used to it. Almost every month we have earthquakes. So one on Monday, and then a couple of small ones,. The this morning there was two strong ones and a couple of aftershocks."

But speaking from Kokopo, 150 kilometres from the epicentre, Gabriel Kote says people are sensitive to the ongoing threat of quakes around the country, especially in the wake of last month's major 7.5 quake in the Highlands which killed at least 125 people.

"With the stories coming through the Post Courier and the communications network, people are sensing that the quake come in heavily or... as I'm now speaking the quake is now happening... so people are thinking about the quake's effects and what might happen."
happen."

Otto Salmang had just left East New Britain on a flight to Port Moresby when the 6.9 quake struck.

Speaking from PNG's capital he says it's still difficult to assess the damage from Monday's quake.

"Because of lack of adequate communication, we were not able to get a report on what specific damages or things like that from the district. So people who we were having some meeting with in Rabaul, they just left on the boat yesterday to the district."

Peter Kaiopuna is in Kokopo, and has been ringing family and friends, trying to find out about the damage in his home village in Galowe on the coast of Jaquinot Bay right near the epicentre.

"It's ongoing but there's no damage yet. we have not heard from other areas yet. But from where I can talk to my people, we have not encountered any damages. We just tell people to be aware and loo at areas like the rivers, if they've flooded or if they go low on their level, maybe there's a blockage up inland somewhere"

He says East New Britain's thick forest cover could provide a natural buffer to the risk of landslides seen on such a large scale in the wake of the Highlands quake.

"But with the magnitude of the earthquake, you never know."