Papua New Guinea's Foreign Minister says his country has growing strategic importance as the link between Asia and the Pacific Islands region.

As PNG's longest-serving Foreign Minister, Rimbink Pato has for the past five years sought to help establish his country as a regional leader.

He says that leadership role is manifest in PNG's hosting of November's APEC leaders summit to which his government has invited Pacific Island nations to participate in for the first time.

Mr Pato spoke to Johnny Blades yesterday while in New Zealand on an official visit. 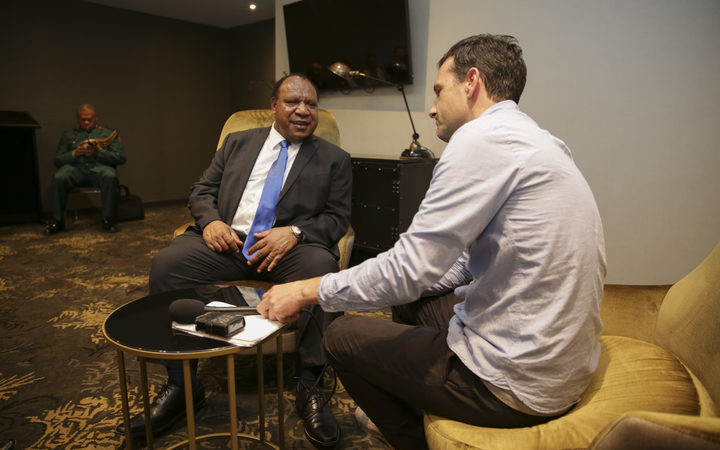 RIMBINK PATO: And at the same time we see our role as a player in some of the issues that affect the Southeast Asia and pacific region altogether, such as human trafficking, people smuggling and money laundering, and issues like that, which are impacting some of the economies in Southeast Asia. And what we want to harness in this (APEC) is trade and investment for us as a country, because of the resources we have, and how we can utilise that opportunity with the connections that we will build, or the connections that we have with the APEC economies to filter the connectivity to the smaller islands of the pacific, leaders of whom we have all asked them to visit, so that they have the opportunity to engage with 60 percent of the world's major trade and investment leaders.

JOHNNY BLADES: A lot of Papua New Guineans seem to be wondering what benefit do they get from their country hosting this big leaders summit. Where's the payoff for them?

RP: Well, Papua New Guinea is the leader of the Pacific. Papua New Guinea has a role to play in the South East Asia region, and of course the world is inter-connected. These are the world's economic leaders who will promote trade and investment in our country. And if we're going to have that linkage to the rest of the Pacific, as a big brother of the rest of the Pacific Island nations, then we want to showcase that by utilising this opportunity to grow our country, grow our economy, bring prosperity for our people, and then security and stability for our region by these leaders coming to our country. And I think there's a huge potential because we have the resources, where there must be feasibility. Our country needs to be seen, needs to connect globally, and here is an opportunity that is not to be missed. So if there's any misgiving, there shouldn't be, because the positives are yet to come.

JB: Can PNG afford to host this summit?

RP: Yes we can. We have a budget, we have a programme in place. All the preparations are underway. We will be able to look after the seven to ten thousand people who will visit our country during the APEC event. We are ready. And of course, if we need any help - as you will find in major APEC summit meetings - the APEC economies stand together.     And of course our great friends, New Zealand and Australia, are making a contribution because this is an event for the Pacific. We're going to create a legacy for the Pacific because it's going to showcase our connectivity, our friendship, our brotherhood. Clearly, if there are any shortcomings in the area of security and all that, we've had the collaborations necessary because our interests are mutual.

JB: As a regional leader, PNG has an obligation to advance the interests of the pacific Islands, and one of those of course is action on climate change. Is enough being done, from your point of view, from the likes of Australia and New Zealand? Australia is still flirting with coal, and of course in your own country, deforestation is a big issue, it's a big driver of carbon emissions, isn't it?

RP: Well climate change is a major issue for the world, and it's a greater issue for the Pacific islands, because we are not the ones that have created the impact that it has on humanity. So what we want to do is in the APEC event we want to talk about climate change. It’s one of the key issues there, and what we're doing and how the world can connect. That's why we've asked the rest of the Pacific Island countries, their leaders to come so that each of them can tell their story in their own way to the leaders of the world. And I've been actually speaking to many of the leaders of the AEC economies and my counterparts around the world to ensure that they have that link so our message gets carried because the impacts of climate change are unique to each country. It's not the one and the same. Of course we will work with Australia and New Zealand, and we have supported for example New Zealand in its campaign for non-permanent security membership in the UN, because one of the key strategies of the New Zealand government then was climate change, and still remains.

JB: PNG has some of the biggest tracts of rainforest in the world, combined with the Indonesian side (of New Guinea), and it's a global concern that those forests are really being cleared at a great rate. There's a lot of unsustainability. Can't more be done, from PNG's side?

RP: Well, speaking for my country, REDD-Plus is a major issue, but our focus is there. We're intent on pursuing a policy which will protect our forestry resource. These are issues for example that Papua New Guinea can't deal with alone. We need multi-lateral frameworks, such as the WTO, or the United Nations systems, because globally and multi-laterally we can take steps which will align the activities of the member states of the UN and multi-lateral agencies to work together to find solutions which will serve not only individual countries, but also bring about sustainable development which will also ensure the conservation of the forest, the oceans.

JB: But isn't it really just in your government's hands, about how much forestry goes on in the country? There is much illegal logging, according to the Governor of Oro province and others; and there's the fraudulent SABL (Special Agricultural Business Lease) system... this has been going on for years and it hasn't been stopped.

RP: No, that is not entirely correct. The government has taken steps. There's been an inquiry into the SABL issuing of licenses and harvesting of logs, and the leases. So in terms of what we can do, government has taken proactive measures. There's a policy which has coming through the Minister for Forests which is specifically aimed at addressing those issues. And in some of these cases, we need the evidence, we need the specifics by those that have it to bring it forward. And some of these are very isolated cases where the statistics don't come out clearly, the data isn't available, yet individual politicians - because of the political points that they might score - they go on Facebook and make an issue where none exist. So if it is an issue, then it's taken out of context, and as a purpose which is not intended does more damage than good for the province or for the districts in which the issues arise.

JB: PNG is the current chair of the Melanesian Spearhead group. Are you concerned about the divisions that are spilling over between Fiji and Solomon islands over the West Papua /Indonesia issue?

JB: Because a lot of grassroots communities in Melanesia are deeply worried about what's happening on the Indonesian side. What can PNG do about that?

RP: Well PNG is a constructive partner to Indonesia, and we're willing to work together, and Indonesia understands our position. If there are issues in relation to alleged breach of human rights, we need the evidence so this can be pointed out, and there are mechanisms for resolution of those concerns. Coming back to the issue of the Melanesia Spearhead Group, the MSG is not the forum in which those issues can be addressed. Our jurisdiction is limited in what we can discuss. But clearly it is a concern.

JB: But this membership issue - the United Liberation Movement for West Papua's application for full MSG membership - has dragged on. Will it be resolved soon?

RP: There is a process and the application was the subject of recent discussions. And the criteria for membership is being worked on, and we the foreign ministers (of MSG) will look at it, make the appropriate recommendations to the leaders. The leaders will then make a decision as to what the outcome (will be). We will follow the process. And the competence of the MSG under its structure is very clear. They can only deal with those questions for which they have the authority to deal with. And at this point, there is no authority permitted by the MSG constitution which allows membership of non-sovereign states, or loose entities, as it were.

RP: When the constitution was framed, it was framed for that purpose, so that was a unique case in itself. They are already members in the organisation. But as to whether the constitution will be amended to permit other membership, because of the restricted nature of its language, that's something for the leaders to canvas.

JB: So you don't think the rift between Fiji and the Solomons is all that bad, you're not worried about the future of the group?

RP: Well these are typical of Melanesian peoples, they have their differences. But there's a time to party together and get together and shake hands and move forward. So I think those rumblings will come to an end. Of course we had those with Fiji, Australia and New Zealand at the Pacific Islands Forum some years back, but PNG was taking a role to resolve those issues, and see where we are, we are together now. So I can see a future where all these issues will be resolved and we'll be together as one united force in Melanesia.