Papua New Guinea's government has been accused of allowing loggers to operate illegally without landowner approval.

This comes as PNG prepares to host an APEC meeting this weekend to discuss tackling illegal logging and the trade in illegal timber. 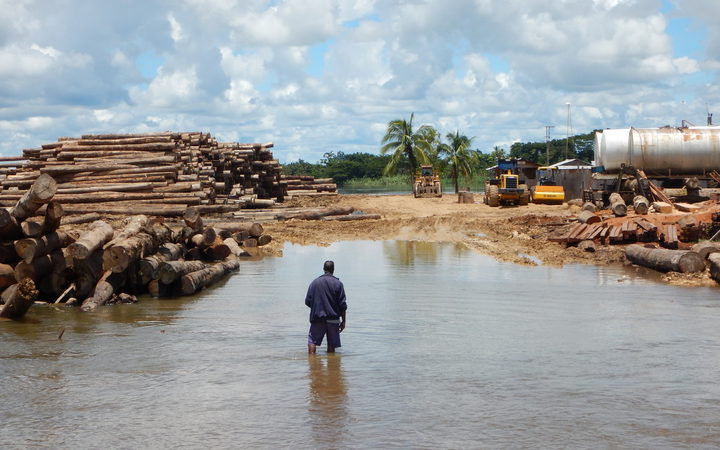 PNG's Supreme Court ruled in August 2016 that a Special Agriculture Business Lease in Turubu of East Sepik Province was invalid, finding that any logging in the area was illegal.

But a policy advisor with environmental NGO Global Witness, Lela Stanley, said despite that ruling, the Malaysian logging company had continued clearing forest.

"Instead of shutting down that operation, PNG's National Forest Board actually granted a new permit to the same loggers that has allowed them to keep cutting down those trees. By November 2017, timber worth over a 180-million PNG kina had been exported from the area, without the consent of the people who actually own it."

But PNG's Forestry Minister Douglas Tomuriesa said that the current operations of the company, Wewak Agriculture Development Limited, were legitimate.

"It is a legitimate project. The landowners already had their own ILG (Incorporated Land Group), their own company, and they decided that since the SABL is cancelled, let's do a forest management area. So they in their wisdom, applied, the clan leaders decided to apply. So they applied for that concession, and it was approved."

Under this permit, the company is ostensibly conducting oil palm operations in the area.

Yet while the oil palm is grown on local grasslands, according to Global Witness, satellite imagery shows that tree cover loss has continued to increase since the court decision.

According to local Turubu landowner, Augustine Mondu, only a small number of landowners gave the developer approval for ongoing logging.

"It is the same people who consented other people's right over their land, and compromised with Wewak Agriculture Development Limited to go and harvest logs, but the dispute is still there. They didn't know exactly the root of the problem. They are havesting logs on other people's clans' land. That is still the dispute."

Under the Special Agriculture Business Lease system, about 12 percent of the country's land was leased in what critics say amounts to a massive land grab.

It was the subject of a Commission of Inquiry over four years ago. This found that the majority of the leases had been fraudulently obtained, were mere fronts for logging, and that they should be revoked.  However in many cases, logging operations have continued under SABLs.

The government has promised to cancel the fraudulent SABL leases, but says it is still working through the legalities of the process.

But as the logging continues, rural communities in PNG become increasingly marginalised, according to Augustine Mondu

"In PNG, especially in my area, the forest is our traditional shopping mall. It exists from our ancestors, through our forefathers and our fathers, and we are still using forests as our livelihood. We gain things to enjoy our livelihood, and it is part of our life. We get food from the forest, we have traditional medicines. we do not rely on hospitals or aid posts or health centres."

Wewak Agriculture Development Limited has been served with a contempt of court notice this week by a lawyer representing Mr Mondu and other local landowners.