The lawyer for a group of nine men in Fiji says they were tortured by the police last month and one was the victim of attempted rape by an officer.

Aman Ravindra-Singh says the police arrived in two vehicles and picked eight of the men up from Waikubakuba village on Viti Levu.

He told Sally Round they were taken to the Nadarivatu community police station where they were beaten up. 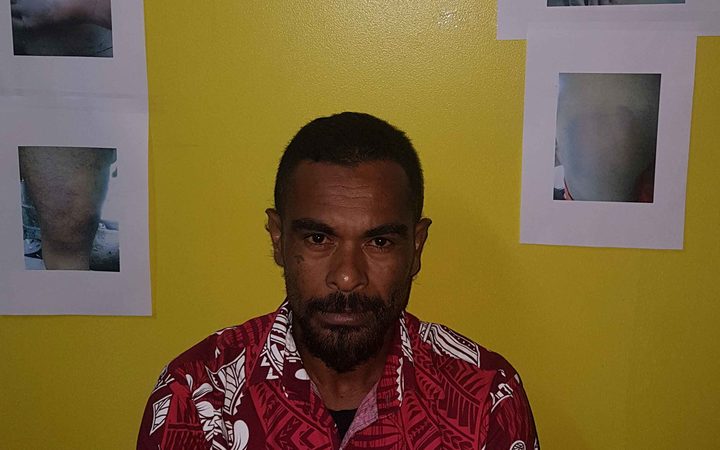 On the the alleged police brutality victims. Photo: Supplied

AMAN RAVINDRA-SINGH: They proceeded to torture these men by punching them, kicking them, slapping them, using police batons on their bodies, using  three-by-two wood and also using cane.

SALLY ROUND: So what were they picking the men up for?

A R-S: During the torture they were trying to extract information regarding cultivation of marijuana.

SR: Were they injured?

SR: What sort of injuries?

AR-S: All persons were badly injured. There are photos which show bruising on their backs, arms, necks, legs, calves. It was an all out brutality session by nine police officers against eight young men. The ninth person was picked up and he was handcuffed to the back, his hands were handcuffed at his back, and he was stripped to his underpants and made to lie in the middle of a bridge with two police officers on either side of the  bridge so he could not escape. The two twin cabs were parked in the middle of the bridge. The music was put very high so his screams were drowned and he was made to lie on his side and he was kicked and punched and beaten with police batons as he screamed in agony and cried to have these people stop the torture on him and finally one of the police batons had a screw protruding out. That screw was used to then stab his wrists, both his wrists on the left and the right and also his ankle.

SR: And what happened to him?

AR-S: When this ended his ankles and his hands around the wrist were very swollen. They had taken off his shoes and when the episode ended he could not wear his shoes due to the swelling. He was picked up from Tavua town and taken to Nadelei Road and  the incident at the bridge was at (inaudible) Bridge. This is where that happened. While the eight other men were picked up from Waikubukubu Village in Nadarivatu and taken to the Nadarivatu community police station where they were tortured.

SR: And this was done at what time of day?

AR-S: The eight men were picked up at about 2.30 pm and the whole incident would have lasted at least two hours and a bit because they were released about 5pm on the 26th of January 2018.

SR: Were they charged?

AR-S: No. None of these nine men have been charged with any drug related offence, no evidence was found , no seed, no leaves, nothing at all to do with marijuana cultivation.

SR: So the men have come to you as their lawyer to represent them?

AR-S: Yes they are seeking justice. During the eight men being tortured in the police station one police officer had also attempted to poke one of the victims with a police baton where he attempted to violate his anus and that in my view is attempted rape and there were eight, sorry seven witnesses who are victims and there were all the police officers who were present during the torture.

SR: The men, where are they now and what are you doing for them?

AR-S: I'm at this point gathering evidence . The men are with me in my office and I've called a press conference to expose what is happening and  then we will be putting in formal police complaints in the next couple of days, hopefully by Friday once I've gathered all the  evidence and the statements. I have photographs. I have three medical reports which is very important and vital to what we are saying and apart from that I'm taking down the statements of these men. They were not taken to hospital themselves but they managed to pluck enough courage and three of them ended up in hospital three days later but they still got proper medical reports.

SR: And the medical reports did they put  any information down  about how the men sustained the injuries?

AR-S: This is a standard medical report whereby (inaudible) background information relevant to the request for a medical report so like I'm looking at one now it says it's alleged he was assaulted by police officers and Nadarivatu Police Post last Friday 26th.

SR: Why haven't you reported this before now?

AR-S: I've only come across this particular case last Friday and then everyone has come back to me yesterday. Initially when the contact was made there was only one person but now I have seven of the men out of the nine. We have managed to get seven of the men together.

SR: Will you be taking this to any other authorities in Fiji? The Human Rights Commission for example?

AR-S: Well the Human Rights Commission in Fiji, as I maintain, is actually an extension of the regime and what they do. All torture cases which have been reported in the past have not seen the light of day. All torture cases that we have reported including Rajneel Singh have not been concluded nor any others made. We definitely face a bleak future when it comes to how this case will be concluded but I'll make sure that I do put in the police report. Whether we have any finalcy out of that is another story but this is all part of my complaint against torture in Fiji and I will also be putting all of these statements, photographs and medical reports to the human rights community.