The French Polynesian government appears to have lost its enthusiasm for the world's first floating islands.

The project, which has support from New Zealand billionaire enterpreneur Peter Thiel, has made global headlines.

However, local opposition to siting the project in the lagoon on the south of Tahiti has seen the government back down - at least for now. 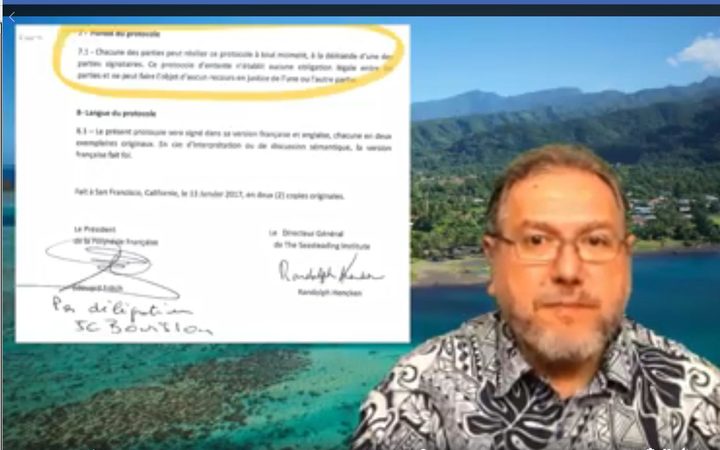 That was Valentina Cross, an opposition assembly member after putting up posters in the assembly - a move which was in breach of protocol and  led to the session being suspended last week.

Ms Cross is a former mayor from the coast along the Atimaono lagoon which is one of the potential sites for a floating island by the US-based Seasteading Institute.

Its representative in Tahiti is a former tourism minister Marc Collins, who told local television that the project is progressing well

"We have 70 volunteers today, 11 people with Blue Frontier, people in the territory following the project and everybody believes in it."

However, he shied away from a public meeting with local opponents, saying he didn't want to politicise the issue.

For weeks, the government has insisted that nothing has been decided and its spokesman Jean-Christophe Bouissou pointed out that it was still only a concept.

"These are naval concepts and constructions which could allow to create platforms where people could live and work according to rules of our country."

The government has been hinting that the opposition is in fact in favour of the project.

This, it claimed, was due to the opposition leader Oscar Temaru having visited a company in the Netherlands which builds such floating platforms.

But his colleague and now member of the French National Assembly Moetai Brotherson dispelled the claim, saying the structures are unsuitable for Tahiti's lagoons.

"These barges are very, very expensive to build and are in no way designed to accommodate social housing."

In a widely viewed address posted on social media, Mr Brotherson pointed out that the French Polynesia government is still committed to the project.

"Who can believe Mr Bouissou when he is trying to backpedal and pretends that there is no accord. The MOU has not been signed by Father Christmas, but by him in the name of Edouard Fritch."

After a weekend meeting, however, the ruling Tapura Huiraatira Party said there would be no floating island in the Atimaono lagoon.

The President said the local community's development would happen with consultation and in harmony.

All this ties in with the hopes of the project planners whose promotional video warns of challenges posed by rising seas.

"Our ambition is to build the world's first sustainable floating islands."

For Ms Cross, there is no room for steel and concrete constructions in the local lagoon.

"It's not for the people of Mataiea, it's for the rich billionaires of Silicon Valley."

The floating island project still stands but seems to need another location for its launch.

The geography will shape the options because the floating islands need a minimum water depth and access to good internet.