It's hoped that new signage for a cemetery in the Cook Islands will cement its historical significance, but there's a need for more help with the cemetery's upkeep.

The Nikao Cemetery is on crown land in Rarotonga opposite the airport and houses the graves of ANZAC soldiers, cancer patients, expats and tourists.

But the site is prone to erosion with many graves having been damaged or washed away by the sea, and there's always weeds.

The mother of Australian based volunteer Cate Walker was buried there after a bout of cancer. 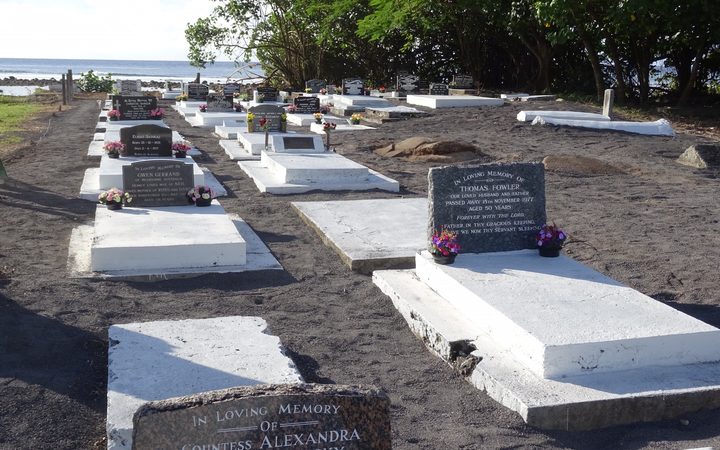 Graves at Nikao Cemetery on Rarotonga after being restored. Photo: Supplied / Cate Walker

CATE WALKER:  When we were there in April, last year, Peter Marshall the New Zealand High Commissioner to the Cook Islands, he came into the cemetery and we had a good talk. He has been amazing and he tried to find some help as to who could help maintain the cemetery. So he spoke to the Police Commissioner, Maara Tetava and he said straight away yes they could do that as part of their community service. It was amazing. So NZ High Commission purchased a brush cutting and gardening equipment. And so the police as part of their police community service go in once a month and brush cuts and keep it tidy otherwise it would be overgrown in no time at all. And then we will be back.  I have had some beautiful descriptive historical signs made, one for the cancer patients and tourists and the other for ANZAC's section just describing briefly how these people came to be buried there as it is government registered crown land as it is customary to bury your own people on your own family land. But these ANZACS is the largest group buried there in the Cook Islands if not the world.

SARA VUI-TALITU: So it's good to have those signs to inform people?

CW: Yeah the signage will add another dimension to the cemetery. It really is a historic site having that large group of ANZACS tourists and patients buried there. Look many graves have washed away and for the cancer and tourist section there would be at least 10 graves that have washed away. My husband found three ANZAC headstones in cemetery where signs had washed away or stones that had washed away and so we were trying to go through archives to find evidence of how many ANZACS had been buried there, I mean obviously there were more.

SVT: This does cost money so has this all been voluntary these efforts so far to keep the cemetery going?

CW: Stage one of the project my husband and I we put in several thousand dollars to pay for and restore severely damaged cancer patient graves. And other people donated paint. Last year I set up a Go Fund me page and raised just over $3000 to finance the cancer patient sign. The World War 1 ANZAC sign,  I put a call out on the Facebook Page to ask for a sponsor and a black pearl business came on board and agreed to pay for that sign and so yes I have fundraised to pay for other tools we have needed but sadly we are at the end of our funds and I have to start a new fundraising campaign. I have always said once people know the history about that site, they can be proud of that site and so before it was this overgrown jungle hiding all this history. But now I have made a sign saying the Nikao Cemetery, a part of Cook Islands' history, which it is.