Pacific to benefit from global climate finance summit in Paris

The One Planet Summit, which took place in Paris last week, has released its 12 commitments, some of which will benefit the Pacific.

France hosted the event with the intention of galvanising international leaders to commit to action on climate adaptation, mitigation and mobilisation.

Our reporter Dominic Godfrey was in Paris for the summit as a guest of the French Foreign Ministry.

Dominic spoke with Koroi Hawkins about what the outcomes could mean for the Pacific.

He started with his impressions of the summit and its side events. 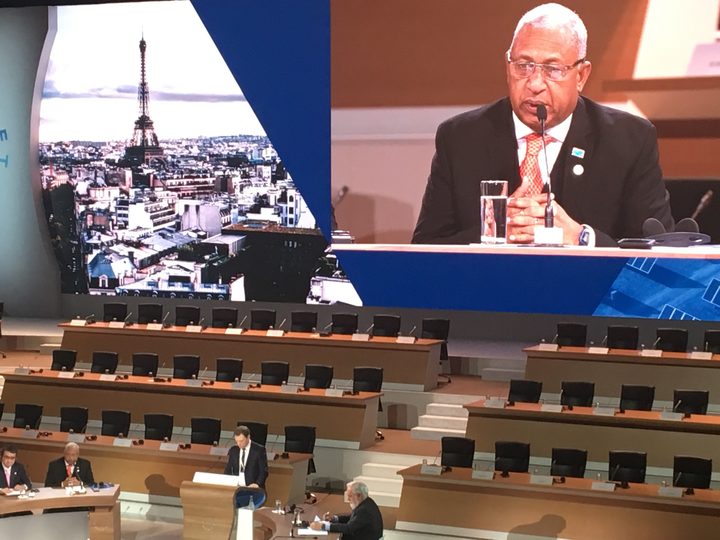 DOMINIC GODFREY: France's president Emanuel Macron really appeared to be making a leadership statement through this event, particularly in the power vacuum created by Brexit, and the diminished role of Germany against its environmental record, plus of course the Trump administration's withdrawal of the US from the Paris Agreement. It was of course two years to the day since the signing of the Paris Agreement at COP21.

KOROI HAWKINS: So the Paris Agreement two years ago where nations agreed to keep temperature rise to below 2 degrees celsius above pre-industrial times. What's the significance of the One Planet Summit?

DG: Well this was really about achieving some concrete actions on climate change and about paying for this greener future. It was presented as somewhat of a green industrial revolution that the French environment minister Nicolas Hulot referred to as a Green New Deal, referencing Roosevelt's response to the Great Depression.

To achieve this green nirvana new economic tools will be employed that will stimulate green industry and penalise those with a heavy carbon footprint, rather a carrot and stick approach. Many of these were rolled out during the One Planet Summit including the World Bank announcing it would stop funding oil and gas exploration and extraction by 2019.

The French insurance giant Axa says it will no longer invest in companies involved in building coal plants and it'll withdraw about 2.5 billion euros from the sector.

KH: So how will industry embrace this change?

DG: Well as Fiji's prime minister said in his presentation it was the certainty that "global financial markets respond to opportunity" and this is quite the opportunity for them. 91 French businesses - in the construction, manufacturing, transport sectors and so on - committed to low carbon business production. That's indicative of a great start and worldwide, business environments will become more attuned to stimulating such outcomes. The shipping industry is another that's plotting a greener course with what's called the Tony de Brum declaration, in honour of the Marshall Islands former foreign minister. Global representatives were called to the summit to discuss meeting climate goals and the declaration calls on the shipping industry to comply.

KH: So now the Summit's over, what's the legacy?

DG: Well there are twelve commitments binding all participants. The French president asked all at the summit to think long and hard before agreeing as they would be held to these actions. They all agreed. Now the commitments are based around three themes: Stepping up finance for adaptation and resilience to climate change; Accelerating the transition towards a de-carbonised economy, and; Anchoring climate issues at the centre of the decisions of finance and its actors.

KH: So what does this mean for the Pacific?

DG: Well all of these commitments either directly or indirectly benefit the Pacific but in short, things are going to get worse before they get better so while the medium to long-term mitigation gets into full swing, resilience and adaptation is key for the Pacific.

Of direct benefit to Pacific Island countries are the US$650-million from the Gates Foundation to help small-holder farmers adapt to climate change.

The Marshall Islands and New Zealand have taken the lead in accelerating the move towards a de-carbonised economy, with 16 nations committing to carbon neutrality by 2050.

The French Development Agency has launched a new initiative on climate and biodiversity to support adaptation to the impacts of climate change in the Pacific.

The "Tropical Landscape Financing Facility" aims to raise US$10 billion by 2025 to fund projects with a significant environmental and social impact in the most vulnerable countries.

There are more but it really was about freeing up global funds to invest in green industry and initiatives.

KH: What was your impression of the mood for change among participants?

DG: I thought there was a genuine and comprehensive desire to move towards this new green global economy. I felt the participants were not just concerned about the reality of the current course the planet is on but were optimistic and realistic about the option this summit presented.