Anti-nuclear advocacy from Pacific Islanders helped lay the groundwork for a treaty to ban nuclear weapons that is gaining momentum globally.

This comes as the International Campaign to Abolish Nuclear Weapons was awarded the Nobel Peace Prize in Oslo this week.

The Campaign, a coalition of NGOs, organised the Treaty on the Prohibition of Nuclear Weapons which was adopted in July by 122 states in the UN General Assembly. 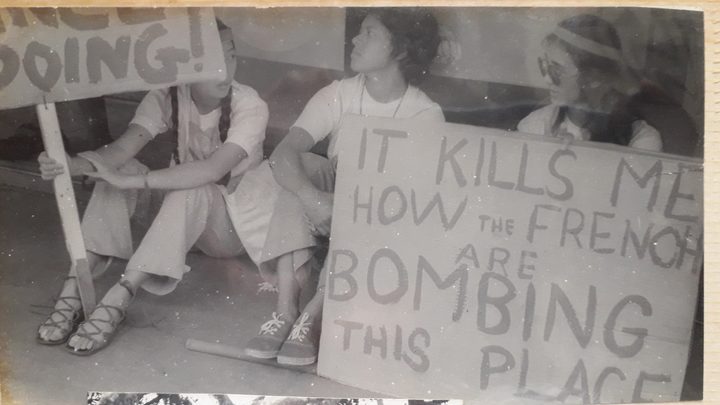 Anti-nuclear campaigning has been conducted in the Pacific Islands for decades. This demonstration in Suva in the 1970s features Dr Vanessa Griffen on the right. Photo: Supplied/Dr Vanessa Griffen.

The Campaign built up to the treaty through a process called the Humanitarian Initiative which focused on changing the mindset about nuclear weapons.

New Zealander Thomas Nash, co-founder of London-based disarmament organisation Article 36 and former member of the Campaign's Steering Group says this meant thinking about nuclear weapons not as symbols of power and prestige, but as destructive weapons that have killed people, polluted environments and poisoned land.

Asked about Australia not signing on, Mr Nash says security relationships with the world's superpowers often mould mindsets on the issue.

"And for them, I think it's hard to break out of a mindset that nuclear weapons actually keep us safe. And for us in New Zealand, that's crazy, right? We dn;t think nuclear weapons keep us safe. We see nuclear weapons like climate change as the greatest threat to our existence as humanity. So I think it's about kind of changing your mindset. I think this treaty, and the recognition with the Nobel Peace prize, is going to go along way to helping us change that mindset."

The United States, Britain and France have tested nuclear weapons in the Pacific Islands region, which has left a tragic, disastrous legacy.

Pacific Islanders know intimately about the health and genetic impacts, as well as displacement caused by nuclear testing, particularly in the Marshall Islands and the French Pacific.

Mr Nash says Pacific Islands communities were very active in the lobbying and discussions around the treaty.

"People in the Pacific played a strong role in that advocacy, both as government delegations like the Marshall islands for example, and also as survivors from Australia who came to the meetings talking about the way nuclear weapons had poisoned their land. And generally, the kind of advocacy from New Zealand, New Zealanders and the Pacific, had laid the groundwork over many decades for the idea of an international treaty to prohibit nuclear weapons."

Pacific regional civil society representatives played a key part in negotiations in New York leading up to the treaty being signed in July.

New Zealand's Ambassador on Disarmament, Dell Higgie says there was also very active engagement by Pacific Islands governments, who were strongly in support of the treaty and its prohibitions being comprehensive.

Ms Higgie says it's unlikely that the nine countries that are understood to possess nuclear weapons will join the treaty in the immediate period ahead.

"They didn't support its negotiation, and they didn't attend it. So I don't think that realistically we can expect any current nuclear weapon possessor to be on one of the fifty that do ratify it."

Fifty states are required to ratify the treaty before it comes into force as a legal framework.

Then, according to Pacific researcher and long-time anti-nuclear advocate Vanessa Griffen, even without nuclear armed nations' support, it will help de-legitimise nuclear weapons.

"It must be done if we as human beings wish to eliminate something we've created which can actually eliminate humanity. If you want to take the worst case scenario, that is possible. And it's not a ranting civil society activist saying this. You have many states recognising, after the evidence, that yes we have to turn around on this and actually have this prohibition, and it is a great achievement to actually have this treaty now."

Dr Griffen says the whole world needs to wake up to the reality that the impacts of nuclear warfare are not confied to borders and will affect the globe.

She says therefore Pacific islanders need to be listened to because they can cite the damage that nuclear weapons can do.