Chief Fire Officer Qio Moceitai told Jenny Meyer it was quite a big area that caught fire and the investigation into a cause will take several days. 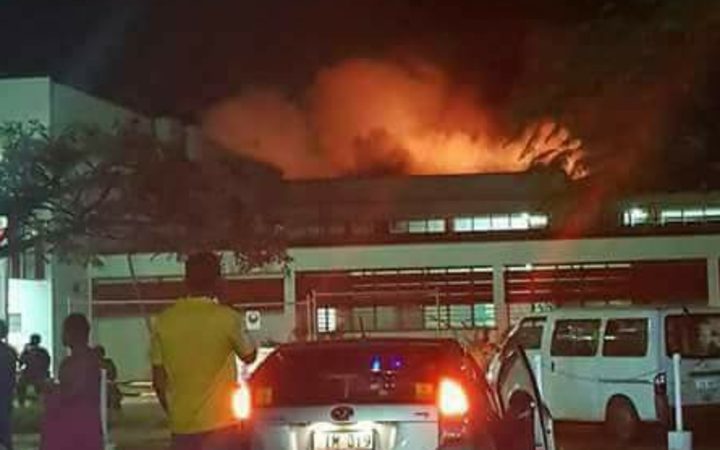 QIO MOCEITAI: Fire at local hospital received at 1.22 in the morning. And three stations have responded; three trucks from Lautoka, and one from Nadi and one from Ba responded immediately. And on arrival part of the building of the hospital was fully engulfed in flames, it's the operating theatre in the Lautoka Hospital. And the boys were starting to evacuate the patients from the hospital, together with the assistance of the police and army personnel from Lautoka.

JENNY MEYER: Do you know what the cause of the fire was?

JM: So you don't know if its like the nurses' toast or electrical?

QM: At this point in time no, we still haven't come up with a cause.

JM: Do you know how many patients you had to evacuate?

QM: Yes and what's happening there now at the hospital? Have you still got people on stand-by watching for the fire?

QM: At the moment everything is back to normal. Only that the part of the building that has been burned, we are coordinating for investigation purpose and clear, that will be done after our investigation.

JM: So there's an interruption to the services at the hospital?

QM: There could be. Because that was one of the, an important part of the hospital, the operating theatre.

JM: So is there anything else you can tell me about what is happening there now at the Lautoka hospital?

QM: At the moment the firefighters are currently doing their investigations, together with police. And the Lautoka hospital is operating normally from the other area that has not been destroyed by fire. And probably that is the situation at the moment at the Lautoka Hospital.

JM: When do expect you might know what caused the fire?

JM: And was there anybody injured, like further injured?

QM: No, there's no injuries.