A Tongan artist and educator has released a bilingual book to address his concern at the future of the language.

Tevita Mohenoa Puloka is the author of A parent's dream, a son inspired and was launched in New Zealand earlier this month. 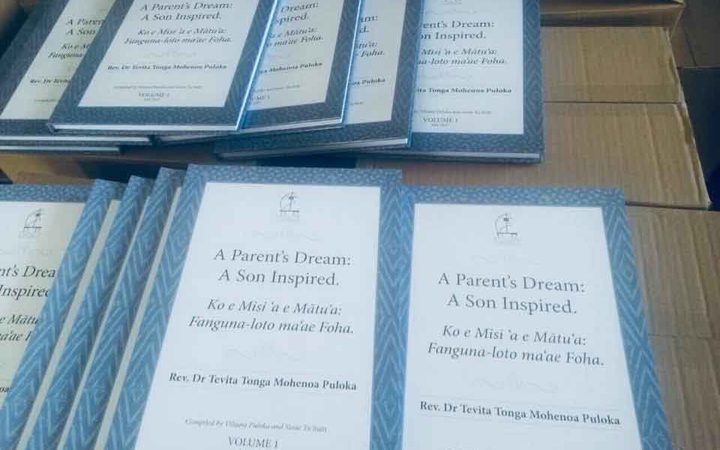 DR TEVITA MOHENOA PULOKA - The book is divided into three main sections. One is the story of a family and it tells of my growing up and also refer to my father was a minister and my mother and I shared with that how we the children were brought up by my parents, but was guided by the teaching of Christian faith and the second part of the book involves some of my malanga, preaching, but in Tongan and also include some guidelines or some help for those who want to write or prepare sermons and the last part contains a lot of my poetry. I write sonnets, Shakespearean sonnets both in English and in Tongan. It contains a lot of help with the Tongan traditions especially the use of the language as I am very concerned about the preservation and further development of the Tongan language.

SELA JANE HOPGOOD - This would be a good tool then for those studying about Tongan culture and the language, those who are of Tongan descent, but for their own personal reasons didn't have the opportunity to be brought up in the Tongan customs or around the language...

TMP - Yes especially and I had that in mind as well since I had my own children in America and a lot of family and relatives outside of Tonga and that was one of the main reasons for preparing that and offering that and a lot of students from the universities have already come and spoke to me and they purchased the books, especially those who are doing Pacific studies or Pacific anthropology and things like that.

SJH - You mentioned that you were concerned about the Tongan language and that's why you wanted to start this book...

TMP - Yes, myself as a writer and a composer, I want to see that wealth of Tongan culture is being preserved and developed. Unfortunately for us older generation, we're seeing the increasing use of the language and basic features of the culture and that is one of the main reasons for why I write this book, is to help the younger generation to have an understanding and appreciation of what we older generation have received from our parents and from our ancestors.

SJH - And this book is not just something you've worked on for a couple of months...

TMP - Oh this is a result of many years of my work because I have kept them in my files and in the computer. Altogether I think at least I would say the last 7 years. This is the work that I've done for the last 7 years and still I'm working on a second volume now and I plan to continue.