Fiji hold the presidency in this latest round which will see the country push for agreement to limiting temperature rise to 1.5 degrees above pre-industrial times.

The Paris Agreement currently allows for a 2 degree maximum but world governments have yet to formalise a plan to drastically curb global carbon emissions.

Compensation for loss and damage caused by climate change is another issue for the Pacific. 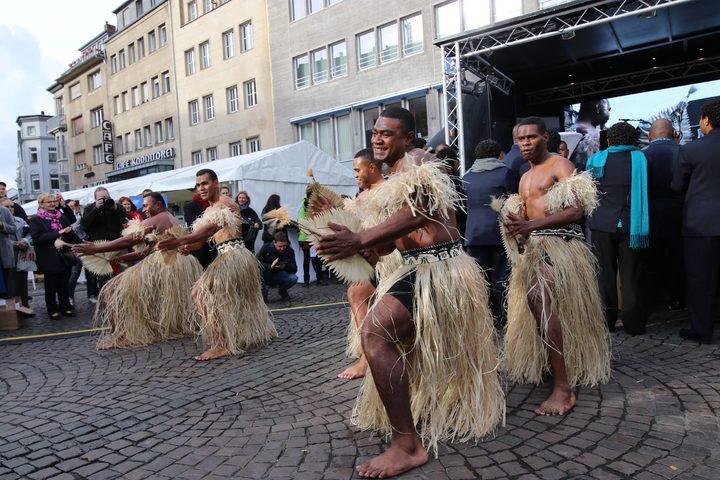 Fijian dancers at the opening of the COP23 conference. Photo: Facebook/ Fiji Government

Fiji's prime minister Frank Bainimarama opened the COP23 presidency dialogue in Bonn this week welcoming the 'grand coalition' of parties and non-parties to the Paris Agreement.

The president's forum introduced a distinctly Fijian 'talanoa' style to engage all representatives.

"...the formal negotiations are governed by the idea of a party driven process. But we also understand that the rich variety of non-state actors represented in this room have a great deal to contribute to that process. In fact, without the non-state actors, we will fall short of the objectives set by the Parties."

Fiji presented an example of how state and non-state actors can work together to fight climate change teaming up with the World Bank to deliver a Climate Vulnerability Assessment.

The study launched at the COP meeting found financial losses due to climate change related disasters are set to increase in Fiji by 50 percent by 2050.

Storms, floods and cyclones currently cause losses of around US$245-million annually.

A lead economist at the World Bank, Stephane Hallegatte, says the new methods developed for Fiji, to assess risk and develop adaptation plans, can now be used by other vulnerable nations.

"Of course other countries in the Pacific but also other developing countries that are facing the same type of issues. And what's really important is to focus on solutions and not only on the impact."

He says climate action for the future should improve the lives of people today and the study team tried to identify ways to build future resilience while having immediate impact.

The study shows climate change related events will also drive more Fijians into poverty, but others are concerned it will drive them from their homes.

The head of the Pacific Island Association of NGOs Emele Duituturaga is concerned there is no provision for climate change induced migration.

"Everyone is talking about mitigation when we're talking about climate change at COP23. Meanwhile, the sea level is rising, there are communities who have to be relocated. Meanwhile, none of our Pacific governments or any governments that we know of have a policy on how we're going to deal with this."

New Zealand is looking at making provisions in this area, and the country's new Minister for Pacific Peoples says he's asked his officials for recommendations.

"Whilst we've got to put this Pacific immigration plan in place that recognises displaced peoples as a result of climate change [and] global warming, we've also got to ensure that we support the island governments to be fighting for their homes, for their very survival."

The adaptation versus mitigation balance will be one that continues in the coming week as world leaders start to arrive and the talks ramp up.

Other likely outcomes will be work on an implementation rulebook and agreements on how to measure progress towards achieving the goals set by the Paris Agreement.