The head of Hawaii's Retail Association says the canned corned beef product Spam is being targetted by thieves, used as currency and traded for drugs.

Tina Yamaki told Jenny Meyer thefts of Spam have escalated since a recent law change on the value of stolen goods defining a crime. 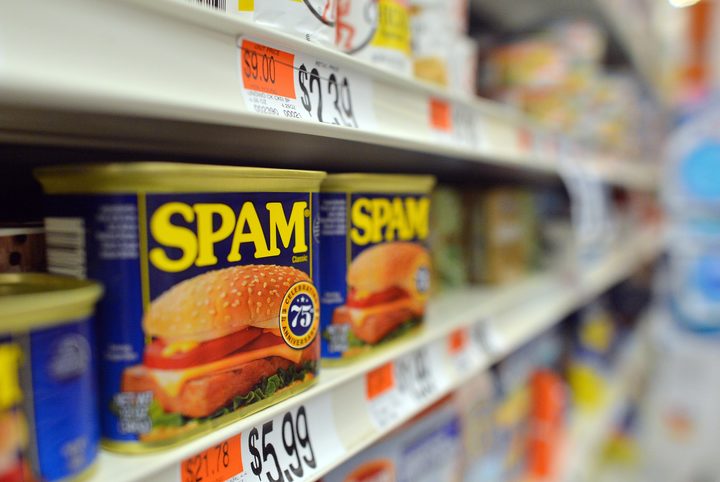 TINA YAMAKI: Spam is very popular here. I think every household has a can of Spam in their cupboard. We're the State that consumes the most Spam in the entire nation. It keeps well, it's canned, you use it in a thousand different ways. Whether its in fried rice or in ramen or you have it for breakfast as Spam and eggs, you know that type of thing. And we're just seeing a lot more people stealing it because the threshold for the felony offence has gone up from US$300 to US$750.

JENNY MEYER: So what are people doing with this Spam? Are they trying to on-sell it on the black market or what's going on? Are they using it for their own consumption? What's happening with it?

TY: It's a little bit of everything. Some people are using it for their own consumption. But when you start seeing cases of Spam, you know it's organised retail crime that's involved. Where they come in to the retailer and somebody distracts and somebody else puts cases of Spam in a cart, they run out the door to a waiting car, load the cart up off to the truck and the truck kicks off. And then you can find it being sold out the back of cars, you know we've heard it's been at the swap meet, we've heard it's in certain small stores throughout the island as well. And also too, we're understanding that some people are using it to barter drugs with. They're using it as currency in other words.

JM: So it's really becoming part of an organised crime problem by the sounds of it. What are you advising your retailers to do to try and prevent this kind of theft of such a seemingly benign product?

TY: Well you know it's not just Spam that's being stolen. A lot of people outside of Hawaii think it's so unusual that Spam is being stolen here. But you know we have other things being stolen like designer sunglasses, and purses, and handbags, and clothing, and electronic goods as well. So we're doing security awareness training for a lot of their employees, and we're asking our customers too that hey, if you see something going on, you know, report it to management.

JM: And how are the Police helping? Are they on to it do you think?

TY: Yes, so we work very closely with the Police Department and the Prosecutor's Office. We are trying to catch these people. We do have a network where if something gets stolen, you know the other retailers get a Bolo alert, which is 'be on the lookout for', this happened to me, this could happen to you. Because we found out if they hit one store, they're probably going to hit another one.

JM: Do you have any awareness of whether it's going on in other areas of the Pacific? Or is this mainly confined to Honolulu, is it throughout Hawaii? Where is it going on?

JM: Ok, so that's quite a, kind of a crafty thing that people are doing to escape becoming criminals, if in fact they're caught, is that what you're saying?

TY: Yes, so they know exactly where the $750 mark is, where they would get prosecuted for a felony offence.

JM: How much Spam would you get for that value?

TY: Considering Spam going on sale for $2.99 a can, you can steal quite a lot.