The United Nations has warned of an imminent humanitarian crisis if Australia fails to maintain essential services for Manus Island detainees after their Papua New Guinea detention centre is closed.

Doctors, detainees and local Manusians say the lack of healthcare on the island could lead to more deaths. 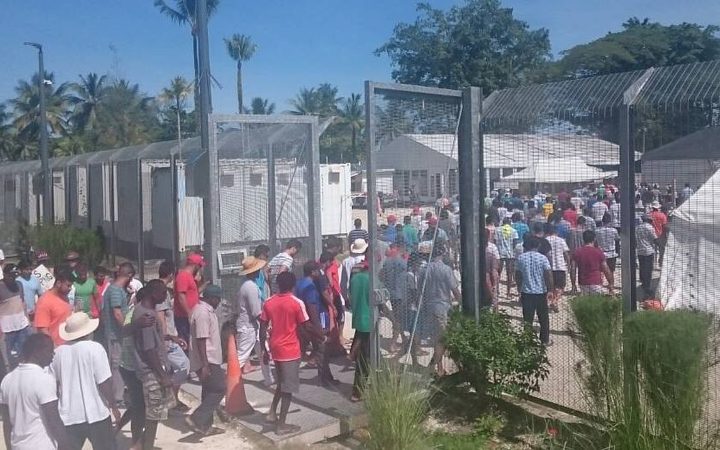 An image from the 75th day of protest at the Manus detention centre. Photo: supplied

Gather your belongings, pack your bags, prepare to leave, that's the message Australia has given to about 800 male asylum seekers and refugees it's detained for four years on Manus Island.

Three buildings in nearby Lorengau town have been earmarked to receive the men, but the UN refugee agency says local medical services are overstretched and unable to meet their needs.

Detainees have appealed to Australian advocacy group Doctors for Refugees, whose president Barri Phatarfod said  healthcare in Lorengau was inadequate for traumatised refugees and violence which may arise.

"It's a recipe for disaster. We've got an absolutely stretched PNG medical service, whether or not they're able to supplement it with extra doctors, psychiatrists, mental health workers. Because don't forget we're dealing with an already highly traumatised group of people who have escaped war, torture and persecution in their countries of origin."

"We've got a hostile local population who have already perpetrated a number of attacks on the refugees and are going to have yet more reasons to do so, if they perceive that the refugees are getting better treatment than they are."

The recently formed Manus Alliance Against Human Rights Abuse is a group of locals advocating for the detainees.

"Manus does not have the capacity to keep a 24 hour monitoring and surveillance on people that are mentally affected. If this is the kind of people that are coming into our society what guarantee is there that they will be protected and not hurt themselves?"

"Right now our hospital is starved of basic goods, basic equipment, implements and drugs. And it's understaffed. So who is going to look after these people."

Kurdish journalist and detainee Behrouz Boochani said the detention centre's healthcare provider dispensed a month's worth of medication to sick men in preparation for its departure.

"IHMS which is the company providing medical treatment for the refugees will leave Manus and we are very worried about our health. There are a lot of refugees who are sick in Manus detention so we are worried and we don't know how they want to provide medical treatment and give medication."

But in a statement IHMS says it will continue to deliver health services at the East Lorengau Refugee Transit Centre.

"Some of these people are in fact on 50 separate tablets a day. So when you have all of those tablets for 28 days, and they're depressed and they're suicidal its such gross irresponsibility to hand very vulnerable, severely traumatised men that many medications and not foresee that there is going to be potentially a catastrophic outcome."

IHMS said self-management of medications was the norm around the world.