A New Zealand-based medical ship found itself in the right place at the right time in Vanuatu this month to help evacuate people from the island of Ambae.

The MV Pacific Hope transported the elderly as well as women and children away from the island's erupting volcano.

The vessel which provides dental and eye care to people in remote areas was on a six month trip to Vanuatu.

Sela Jane Hopgood spoke with David Cowie the chief executive of the faith-based charity Marine Reach, which operates the ship. 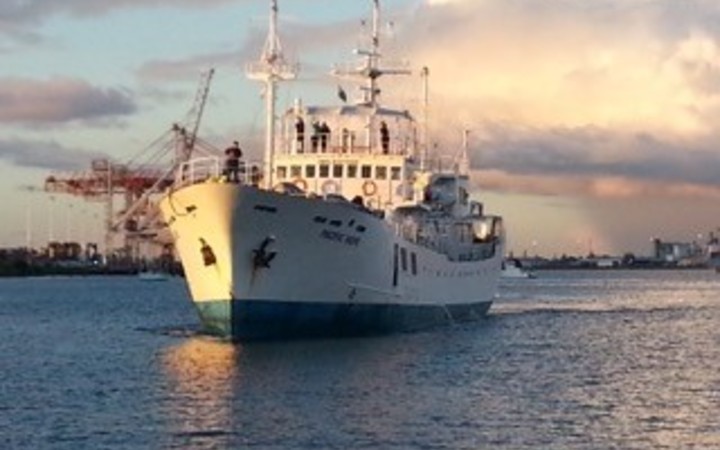 DAVID COWIE - One of the dreams we've always had in upgrading our vessels across the south Pacific over the last 25 years is being in the right place at the right time, especially when a disaster strikes and that's not always easy to do, but for the first time in a very long time we were in the right place at the right time. We were in Port Vila and we got a call from the government of Vanuatu saying listen can you help us, there's volcanos going off in Ambae and we got to get these people off, so we quickly got everything together, within 24 hours we headed north to Ambae island, a 17 hour trip. Went straight into the village of Lolowai and we didn't know what to expect. We just knew that we had to take people off and so we went to Anguilla Bay and send an inflatable ashore to pick up whoever we're suppose to pick up. We didn't realise that we were taking off 70 very elderly patients from the local hospital.That was a major challenge for us because several were totally blind, several couldn't walk at all and the rest were very elderly and we had to get them out of the inflatable, the ship's tender on to our platform alongside the ship and then get them up the stairs into the ship, so it was a major challenge, but the crew did so well and we were able to evacuate the first 70, got them settled onboard and then we sailed the five hours back to Luganville, where there was a great team of healthcare professionals, waiting for them to take care of them, so it was a major issue for us, but it was just great to be right there at the right time.

DC - Yes, everybody pulled together of course and chipped in and did what they had to do to get everybody onboard. We actually did two trips, so as soon as we got there, we turned around and went straight back that night, arriving the next morning for all the women and children that were left onboard, so then once we onloaded them, we're able to get them back to Luganville as well and as we were sailing down the island, you couldn't actually see the volcano except this menacing red glow in the clouds just above it, so we knew that the situation was quite serious and of course nobody knows whether the volcano is going to blow or not and the government couldn't take the chances and it still might, we don't know, but we're so glad that we were there at just the right time.

SJH - Did you have enough supplies such as food, medicines onboard?

DC - Yes! We've got a medical clinic onboard, so some were in need of medical care. They did have some, a small amount of medical staff with them for the patients. We had enough food supplies onboard and took care of them in that regard as well, but once we got back to Luganville, the government was taking care of their physical and medical needs, so we were able to just get them there in time for that.