Logistical challenges in returning thousands of people to Ambae

The head of Unicef in Vanuatu says there will be serious logistical challenges in planning the return to Ambae.

The island's 11,000 people were evacuated last month when the island's volcano started erupting, covering much of the island in ash and killing crops.

The evacuees are currently in evacuation centres on the nearby islands of Santo, Maewo and Pentecost.

The government last week extended the state of emergency for another fortnight, but with the volcano settling down, a repatriation to Ambae could occur within a month.

Unicef's Andrew Parker told Jamie Tahana the government is working tirelessly to plan for what will be another major challenge. 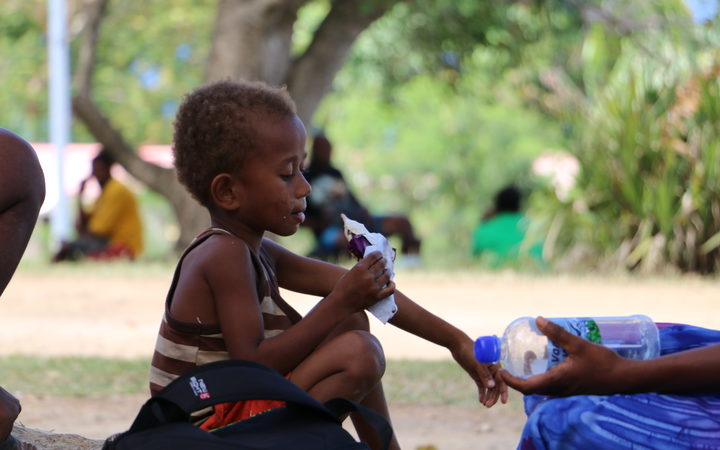 ANDREW PARKER: The government have taken advice from volcanologists and the experts in that field, and certainly that has been the basis for downgrading the level of alert from a four to a three, with the volcano. The government wishes to ensure an orderly process of return. There are obviously concerns of self-return in an unregulated way back to an island that is effectively unpopulated. The question of personal effects and, of course, livestock was turned loose at the time of evacuation - so livestock being a sensitive issue in many cultures. There's expected to be damage to food crops by roving livestock but also in terms of gathering up one's own livestock. So issues that are sensitive. The government wishes to use the next two weeks up until the 19th to continue to do detailed assessment on ground to look at certainly the situation damage, but also the situation in terms of change around water supply, but also around other key factors of return - availability of food, and so forth. During that period they wish to come out with a very clear plan in consultation with the community leaders, and then thereafter it would be likely that they return [will be] triggered and, given the speed of evacuation, the government certainly demonstrated it could move people back very quickly once that decision is made to go back. And it's certainly one that the prime minister gave an indication a decision was being held pending clarity on the actual situation on the ground, and the detailed plan as to how to return people. Whether it should be community leaders who go back, whether it should be whole communities as in minimising conflict and everybody going together, whether they hold back women and children and potentially those with disabilities. So the staging of that is something of particular concern to the government.

JAMIE TAHANA: Indeed, I guess it goes to show that they can go back but there's still challenges remaining, aren't there?

AP: Ambae itself, in particular with regard to access to water in the west, has always been problematic and this is the dry time of year. We actually flew down the south coast, the shore of Ambae and what was absolutely notable, other than the livestock over the airstrip, was the cascading waterfalls off the mountain. So they'd obviously had some serious rain up on top of the volcano. So there's certainly hope that the assessment teams will find water tanks actually fuller than when they left. So there are some signs that it may be more positive than could be the case, but it is certainly a difficult island in the west in terms of water and the pre-existing conditions are unlikely to have changed too much.