Polynesian Panthers hope to inspire the next generation

The Polynesian Panthers want to find out how to motivate modern Pacific youth.

The Polynesian Panthers rose to prominence in New Zealand in the 1970s when they fought against racism directed at the Pacific community.

Sela Jane Hopgood was at a recent event which focussed on former Panthers' wanting to pass the mantle to today's Pacific youth. 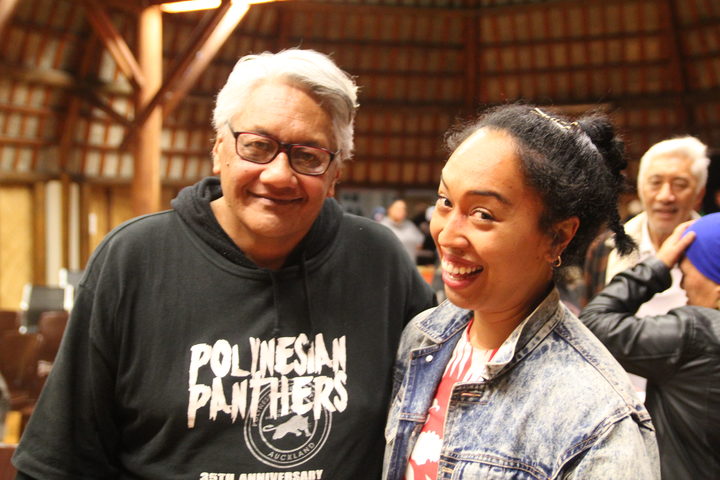 It has been 46 years since the revolutionary movement Polynesian Panthers began.

Pouarii Tanner, who is the daughter of one of the founding members Nooroa Teavae, led the latest event.

Ms Tanner says the idea for it came from a discussion she had with Polynesian Panther Will Ilolahia.

"The elections just happened and one of the things we were talking about was how hard everyone tried to engage people to vote this year including Pacific people and how important it is for Pacific young people today to stay politically involved and up to speed."

Ms Tanner says times have changed since the 1970s and therefore finding out what the community's thoughts are is crucial.

"We're talking about young Pacific people who were politically active years ago and today New Zealand on a whole is still trying to engage that same audience, so let's reflect on how far we've come and what we can do now, what new things we face rather than looking at the same things again. Things they fought for then don't need to be fought for now. What's the next iteration of their work? What new stuff do we face that they didn't have to face then? And how can we contextualise the work they did in the '70s to modern young Pacific people today? 0:33

The event was held at the iconic Maota Samoa or Samoa House with just over 100 people attending.

"I was at school with Will. There was a lot to what he was doing than I realised." 0:04

"I think its just really important as like New Zealand born Samoans or Pacific Islanders in general just getting in touch with our history and knowing a lot more about it and what actually happened and what has shaped us as like our culture."

"What brought me here was what the Poly Panthers have done for our people and I get a sense of empowerment from it."

One mother, who wishes to remain anonymous, says her two daughters are the reason she attended.

She admits that she has found herself avoiding learning about the treatment of Polynesians in the 1970s because of how bad it had been for her parents.

"I've heard about it, but I've never wanted to see it because I knew what the outcome was for all Pacific Islanders back in the day. It's history for the making for me to see what our people went through when they immigrated here. What our parents had to fight coming into New Zealand, not knowing the language. Just imagine the difficulty and not only that the racism that was there as well, so they paved the way for us, so the best that we can do is pass it on to me and now I'm passing it on to my children."

"There's another culture and it's been there all the time. It's the youth culture. We might not understand all the dynamics that are involved in that culture, what the ethic is, but there are many young people who are leaders. There are young people who can step up to the challenges. At our time racism was in your face, no way you can avoid it. These days maybe it's a little bit more subtle." 0:22

A 2010 documentary of the Polynesian Panther story was shown at the event to help give context to the discussion.