The Australian government has been told it should feel ashamed of its offer to transfer refugees detained on Papua New Guinea's Manus Island to its other detention centre on Nauru.

With the Manus Island centre due to close at the end of the month, both detainees and advocates have condemned Australia's failure to find a humane solution. 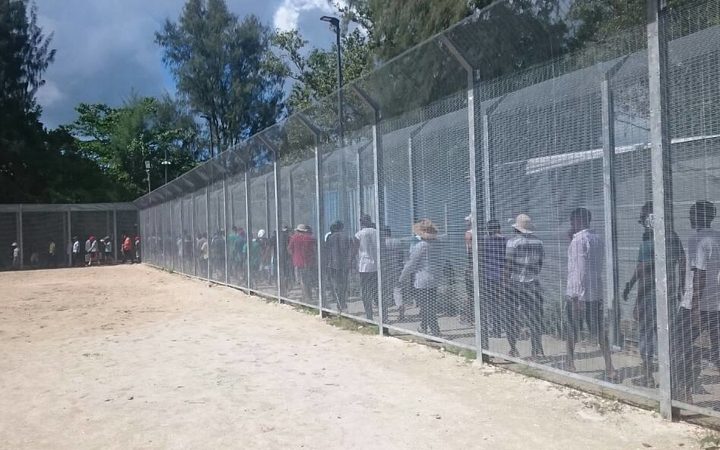 Detainees gather for the 64th day of protest on Manus Island. Photo: supplied

The Kurdish journalist and detainee Behrouz Boochani says Manus Island refugees are appalled by the offer to move to what they describe as another hell.

Legal advocate Daniel Webb from Australia's Human Rights Law Centre says the government is scrambling to prolong its offshore detention of refugees as the PNG government forces the gradual demolition of the Manus centre with detainees still inside.

"And it beggars belief that four years later, these innocent men are still trapped behind those same fences. Now after four years of fear and suffering and violence, these guys deserve safety. Just shunting them from one prison island to another doesn't cut it. I mean, it is not good enough for the Australian government to just shift the suffering, to just shift the cruelty. They've got to end it and bring these men to safety."

Three buildings in Manus Island's Lorengau town and a prison camp in Port Moresby have been earmarked to receive detainees after the centre's closure.

But Behrouz Boochani says dozens of attacks on refugees by Manusian locals show refugees should not be left in Lorengau.

Only 25 out of about 900 Manus detainees have so far been resettled in the United States, while 150 detainees face deportation back to the persecution they fled.