Five Pacific countries aim to grab the attention of the New Zealand market with their coffee and chocolate products.

The companies from the Pacific are part of the Pacific Trade and Invest programme, which helps them gain a better understanding of the New Zealand market. 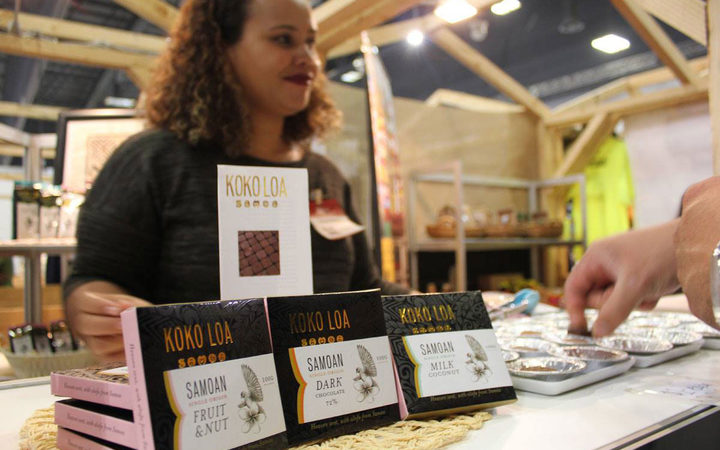 From Solomon Islands to the New Zealand city of Tauranga a certain chocolate is said to help a consumer's health stay on track.

The general manager, Glen Yeatman, says he considers it a health product.

"I actually had an elderly lady come up to me at the Tauranga food show this year and tell me just how good the nut bar is for keeping her sickness at bay because it's so high in antioxidants. We have parents with children who can't have a nut in their chocolate because there are no nuts, there's no dairy, there's no soy, there's none of that stuff." 0:21

"We're trying to put the Solomon islands on the map. The people own the land and they always will do and what we do is we work with them to help with good crop rotation. The problem with cacao in general is that unless you keep it young, it doesn't produce as good as it should, so we looking at things like because it's naturally organic, we let the bugs basically control we don't spray with herbicide etc. We trying to get as natural a cacao beans in the Solomons, so that we can make as gooder chocolate as we can here in NZ." 0:29

Managing director Tautaituasivi Tagaloa Eddie Wilson says the name of the chocolate comes from combining the mystical god Tagaloa with the Samoan word for cocoa, letting it read the food of the gods.

Mr Wilson says he wants his products to provide a message of longevity and perseverance.

"Cocoa from Samoa is well known worldwide as a flavour bean used for premium chocolates in Europe, in America and especially in our neighbouring countries NZ and Australia, so when we ventured into making chocolates in Samoa was a challenge, but I think over the years we've been able to develop processes that enables us to capitalise and bring out a product with unique quality." 0:26

But Mr Wilson says there are challenges for chocolate makers.

"The heat is enemy number one of chocolate and humidity is enemy number two, so we formulate our Koko Loa formulation, it's a tropicalise formulation, which is aimed at increasing the melting point, so it doesn't melt in the heat. Samoa's average temperature is 30, 31 degrees celcius. The melting point of our chocolate is 34 to 38 and we're trying to increase it." 0:23

Mr Mafile'o says they run Pacific youth mentoring programmes in south Auckland schools and a Community Cafe that is run with a team of young Pacific people.

He says the couple also run the coffee farms in Tonga.

"What we do here with our mentor and stuff, so every coffee that we bring here from Tonga, we donate it to our organisation here and every profit that we make it here with the business or the work we do here, it goes back to the programme helping the youth." 0:14

Mr Mafile'o says being part of the event in Auckland is not just about networking, but getting their story out.

"Being a Pasifika and bringing our story to share with people about, you know, how we work in the grassroots all the way up to where we are today and learning from other people they've been working in the and running thing for a long time is really exciting to see that, having this opportunity to represent us islander." 0:18

The Chocolate and Coffee Show is on throughout this weekend in Auckland.