The Papua New Guinea Hunters rugby league team stand 80 minutes away from a fairytale finish to the season in the Intrust Super Cup.

The Port Moresby club will make their first grand final appearance on Sunday against Sunshine Coast Falcons at Suncorp Stadium.

It's the biggest match in their four year history and comes amid calls for a PNG side to gain entry into the NRL. 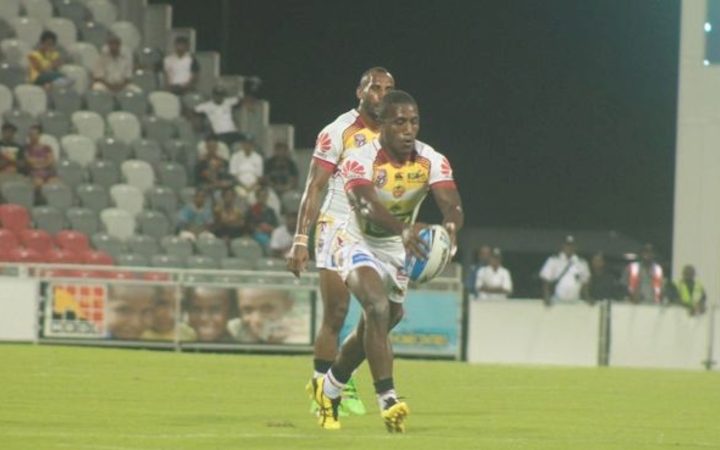 The PNG Hunters have already created plenty of history this season: securing the Intrust Super Cup minor premiership for the first time and winning their first finals match, at the fourth attempt.

"It's not a one-man effort but thanks to the team effort that make it possible to come this far so as a leader I'm really thankful for the team to come this far...the feeling is great, the boys really deserved a rest after the good performance in the major semi so all the boys rest last week so the body is fresh for the big one".
DUR:...18 sec

The Hunters have won 18 of 24 games this season but were thrashed 38-14 when they last faced Sunshine Coast back in April.

The Falcons also ended the run of Michael Marum's side in the first week of last year's finals campaign.

"That's something we wont forget: them coming up here second weekend away, beating us up in front of our home fans - that was one game I will never forget. We've played them eight times..since 2014: we've won four and they've won four so we're equal a lot in that regard. We've won one away, they've won one away so it all comes down back to how we turn up Sunday and approach this very important game".
DUR:...22 sec

Michael Marum admits grand finals are different but says they will try to treat the game like any other, insisting the pressure is on their opponents.

"A lot of expectations from everyone up here, they always want us to win,"but the good thing is we're probably rated as underdogs."Favourites is Falcons, they're the favourites for the title, but that's what we want and the boys have been preparing well so far. They've all stuck together and no one is getting ahead of themself and doing stuff on their own and it's more of a team effort, everyone putting in. Even the players that are not part of the squad but they're still travelling (with the team) - it's a good feeling in camp here".
DUR:...27 sec

Sunshine Coast Chairman Ashley Robinson admits he wasn't in favour of the Hunters joining the competition four years ago but says, apart from his own club, they're now his favourite team.

One of the main attacking weapons for the Falcons is a familiar face to PNG supporters.

Kumuls international Justin Olam starred for the Hunters last year and has been equally impressive on the Sunshine Coast, on loan from the NRL giants the Melbourne Storm.

"He was outstanding in the first round when we played (them). He only played half a game - they had some injury issues with (parent club) Melbourne and they told us he could only play either the first half or the second half. He played the first half and he ran 212 metres in a half of footy so I know that Michael and his crew will have done some work on that for this time".
DUR:...16 sec

The Hunters expect to have plenty of support in the stands on Sunday, with flights from Port Moresby to Brisbane full up with fans heading along to Suncorp Stadium, while Ase Boas says they will have all eight million Papua New Guineans on their side.

Whoever prevails will also advance to the NRL Club Championship next weekend against the winners of the New South Wales Intrust Super Premiership.