Bainimarama calls for new emissions target at the UN

Fiji's prime minister has made a renewed call for a more ambitious target for reducing global carbon emissions at the UN General Assembly in New York.

In his address on Thursday Frank Bainimarama urged world leaders to be more ambitious than the two degrees target set in Paris in 2015.

Mr Bainimarama is to take on the presidency of the Conference of Parties on Climate Change with the assistance of Germany at the 23rd meeting in Bonn in November.

Koroi Hawkins tuned into Mr Bainimara's address at the UN where he told leaders they should commit to limiting the rise of global temperatures to 1.5 degrees above pre-industrial levels. 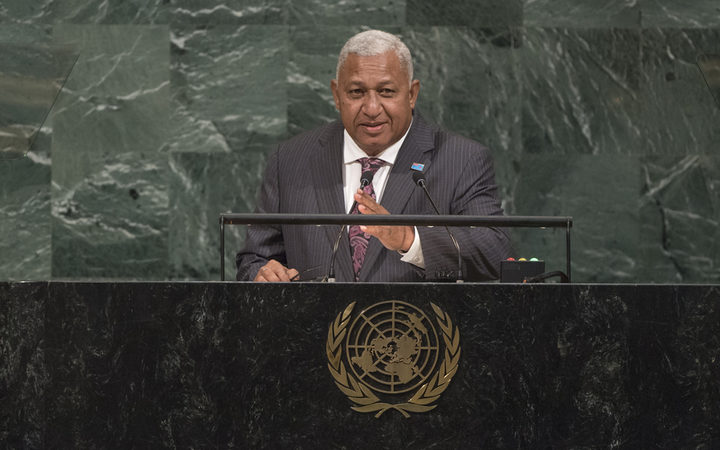 Frank Bainimarama contributing to the general debate of the 72nd Session of the UN General Assembly. September 2017 Photo: UN

Mr Bainimarama also made special mention of the millions of people in the Caribbean suffering the ravages of Hurricane Maria so soon after Hurricane Irma.

Frank Bainimarama also challenged leaders to do more for the most vulnerable low-lying states already bearing the brunt of the negative impacts of climate change.

And concluded by calling on all countries to ratify the Paris Climate Agreement and commit to making it a reality.