The people of Erromango in Vanuatu will have improved access safer and more secure water supplies from now.

This comes with the help of multiple donors, including the New Zealand aid programme, UNICEF, and CARE.

The UNICEF head in Vanuatu, Andrew Parker, says it's crucial to improve water systems for a country prone to natural disasters.

Mr Parker told Sela Jane Hopgood that this effort was part of the recovery programme after Cyclone Pam. 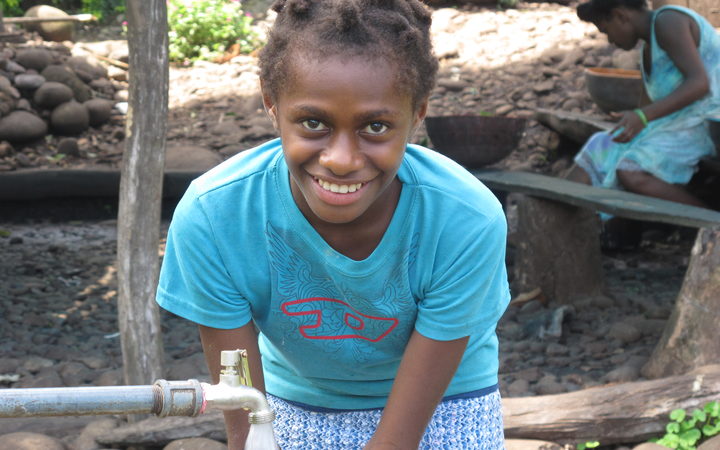 ANDREW PARKER - Erromango is one of those locations that has a relatively small population given the size of the island. However, the access to the water there post Pam was worse than it had been pre-Pam and the emergencies tend to get an opportunity to address short falls, so in Erromango the sector recovery activities, with community discussions on drinking water, on management and maintenance of systems, on sustainability, on conflict within communities, on risks associated with water supplies, water quality and various emergency that come up periodically and that sort of really informed the designs and the approaches that were then chosen during installation. The teams on ground worked with communities to put together the committees. In Erromango these are 40% made up of women and this is something that the Ministry of Lands has actually legislated as a requirement, so it's good to see a positive reinforcement coming through the recovery type activities and there was training given in terms of plumbing and troubleshooting and general management of water supplies. Along the way, opportunity was taken to promote the sort of wider component of the WASH package being Water Sanitation and Hygiene. Safe sanitation hygiene practices were promoted and there was a particular emphasis given to menstrual hygiene management with specifically girls' toilets in schools being fitted with taps inside the toilet and washing facilities for menstrual hygiene management.

AP -   It's particularly encouraging to see the water committee members actually participating, the female committee members not just being tokenism, but actually becoming a hands on component of the maintenance and management of those  water supplies. Certainly Erromango sets the tone and has certainly shown that there are some very strong opportunities that come out of this.

SJH - How will this benefit the health needs of children in Erromango?

AP - The linkages between the water systems, water supplies, water quality and health are multiple. One can divide them between chronic and acute issues around health, so clear relationships between clean water and child health and child development, so one of the biggest components is around nutrition. Vanuatu has a stunting of children of about 28.5% and in the 2.5 year old age group, that's around 40% of children that are stunted. That impacts on mental and physical development and Oceania as a region is the only region globally that has seen an increase in stunting by 4% between the year 2000 and 2013. It's a chronic issue within the Pacific, but water supply has a direct bearing on, given that stunting is largely influenced, not only by diet, but also by ingestion of faeces, so if you don't have clean water, you've got bad sanitation, you've got bad hygiene, you package that together as a negative input to nutrition and intake, you end up with significant stunting. It also impacts on school attendance. Hand washing is something that has been shown to really reduce absenteeism, but without water it's not really feasible and menstrual hygiene management facilities again require water supply and directly influence the attendance of girls of a menstruating age, so again, school attendance is something that is hugely influenced in a positive way by a solid reliable water system. Then we are in the health system. Healthcare associated infections are a major concern and a major cost in many countries. Health staff that don't have water supplies and functional WASH facilities are really ill equipped to deliver safe services within the health environment, either in the facility itself or in outreach at homes. In terms of the acute side, under 5 mortality in Vanuatu has dropped since the 1960s. It has dropped from about 155 for 400 children, so about 28 for 400 children in 2014. And most of these deaths are still reported to be in the 6 to 11 month age group. In other words the infants. They are a very susceptible group and their primary caregiver in that category again is the mother or the woman in the house.