Hope for change in way PNG elections are run

Candidates still need a lot of money and resources to win an election in Papua New Guinea.

That's according to Mathias Kin who stood for the regional seat in the Highlands province of Chimbu during PNG's recent election.

The Electoral Commission has come in for heavy criticism over the many flaws in the electoral roll and inconsistencies with ballot box distribution experienced during this election.

Mr Kin, a writer, social worker and former public servant with a science degree in metallurgy, says he believes the election was in part engineered to ensure the re-election of the People's National Congress-led government.

He told Johnny Blades that the assertion by the Australian government that it was a successful election is a joke. 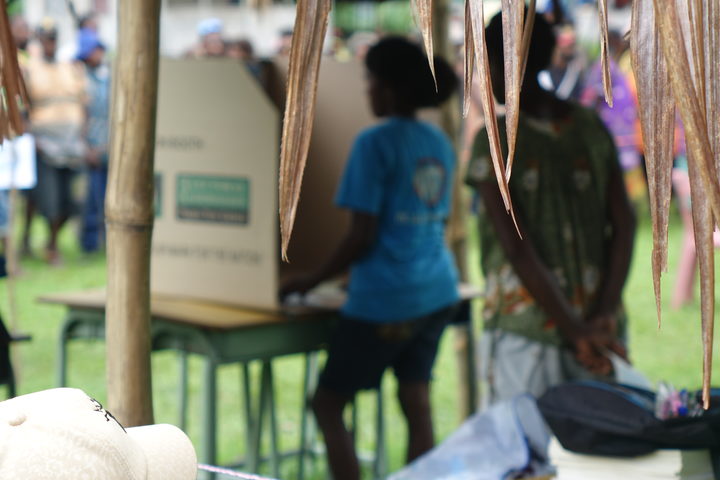 MATHIAS KIN: The reality on the land is that it's been so bad. People are dying, homes burnt, a lot of destruction, properties going up in flames, coffee gardens destroyed, livelihoods... you know, people are struggling to get to a new start again. I think it's been a very bad election.

JOHNNY BLADES: You had some trouble up in Kundiawa town, regarding the election for Tobias Kulang's seat, there was some deadly fighting there?

MK: Yes, there was some deadly fighting here. The PNC (People's National Congress) man, Tobias Kulang led a faction, his supporters, into town and challenged anybody and everybody. And they fought back. I think one of his people was killed, and a lot of vehicles were burnt and a lot of the other people ended up in hospital with serious injuries. Luckily just one died.

JB: Why do these people fight, is it to influence the counting, is it just a gesture?

MK: Well, they think they can influence the counting. They think that they can drive fear into the counters, you know, people will not turn up for counting and the security forces will go to their side and so on. It doesn't usually work, but they still do it... because they spend so much money, so much time trying to win the elections. Some people do it because... it's a 50/50 thing: if they do it, somebody might stop on the other side and they might win this election. But most often they don't win, these people who do these things. If they know that they're in a good position, they won't do these things. If they know that they may lose the elections, they will do it, and Tobias Kulang had done that. In the end he lost, in the fight as well as the counts.

JB: Did people in Chimbu find that their names weren't on the electoral roll where they had previously been on, or glaring omissions in the roll?

MK: Yes, plenty. Plenty of people were not on the common roll. The problem was that the boxes containing the ballot papers arrived in Kundiawa very late, on the week of the elections. Two days before the officials actually went to the polling places, the boxes arrived. So there was no time for the people of Chimbu to check if their names were on the common roll or not. So that was the biggest flaw in the preparation of the election.

JB: Nonetheless in your province, actually, the results in the electorates are not all that much in favour of the People's National Congress is it? There's a bit of a mix of parties who have prevailed in your province.

JB: Doesn't that show that maybe the system is working? Or is it because people took care. I do know that Kerenga Kua (PNG National Party leader and MP for Chimbu's Sinasina-Yonggamugl Open seat) and others alerted electoral officials to inconsistencies early in the process, didn't they?

MK: Yeah. You see people here, a lot of people don't like PNC. But they had a lot of money to throw around, to bribe people, to make big parties. So people in Chimbu, as elsewhere in the Highlands during the elections, they respond very well to monies, parties, pigs, lamb flaps and all these things. There's a system here called 'mere tere'. Mere tere means: you give me, I give back to you. It simply means, if you give me something I give my votes to you. So that's the thing that has been working. And as long as you have the money, and you play this system, you win the elections. So PNC had a lot of money to pay all the candidates. They used that money. But even then people decided for the party. You need a lot of money and a lot of resources to win elections in Chimbu, yes.

JB: Right. And you stood in the election. Did you not have enough money to throw around, and pigs and lamb flaps and stuff?

MK: Well, I needed money to do administrative things and I needed money to put fuel in my car. I needed money to buy (indecipherable) for my followers and so on, to move from place to place. It's a big province. I stood for the regional seat and I needed to move around. For administrative purposes purely. I don't believe in giving monies to people. I don't believe in giving big parties. I always came in along those principles. I stood for a party called People's Progress Party, Sir Julius Chan and Ben Micah's party. But they did not give me any more, they only gave me ten thousand kina, and ten thousand is not enough money, that's nothing. I couldn't move around. I used my own resources, and in the vicinity of 70,000. So I used about 80,000 in total but still that was not enough to challenge big people in PNC and other candidates who were using a lot of money. So I lost in the end, but I had a good time, and people knew what I stood for. Maybe in the near future when people start changing their attitude, then we may do better.

JB: I know that's been the way in PNG for a long time. Do you think this will change by the time of the next election? Some of these problems as well with the electoral roll and ballot boxes...

MK: Well, as long as we have this government in place, things may not change. Because the idea of going electronic was around for a while, since the late 1990s or the early 1990s, I think. But the ruling party never wanted to go in that direction. And the idea was mooted again at the time of Michael Somare and towards the time of (Peter) O'Neill. And they didn't want to go in that direction because they still wanted to use this old system. So the idea of going electronic, where you use your one person per vote, that idea is excellent. But the politicians will not go in that direction, because they need to have the old system in place so they can continue their bribery. They want to maintain power. But what we need is a lot of education and awareness. And these people need to be educated on the things we're talking about. It might take quite a while. I don't think these things will change in the next (election) in 2022. What the government really needs to do is... and the opposition and people around, must push for an electronic system. At least it will do some good - not everything good, because the bribery will still go on, the pig killings will still go on, the money being thrown around in the village will still go on - but at least if the electronic system comes on it will be one person per one vote and I think that's a good idea to go forward to start with.