There's more fallout from a confrontation between media and Indonesian officials at the Pacific Island Forum Leaders summit in Samoa's capital last week after the topic of West Papua was brought up.

A protest supporting West Papua's independence was staged during the summit outside the Forum's venue which upset Jakarta. 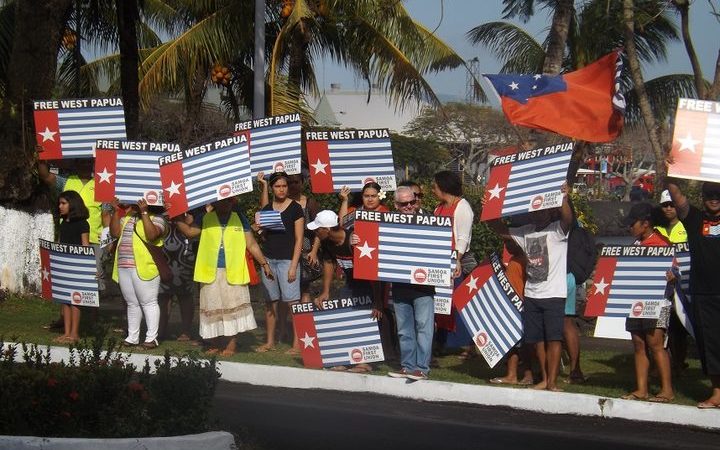 The co-ordinator of the Samoa First union, Jerome Mika was the person who led the West Papua protest during the Forum summit in Apia. Mr Mika disagreed with comments that followed from the Indonesian government representative, Franzalbert Joku, that the forum was not the place for the Papua issue to be raised.

"The theme of the whole Pacific Leaders Forum was about looking at leadership and being able to find ways to be able to help and prosper our Pacific region, so I think it's important for us to be dealing with issues of West Papua especially when in Samoa we had our independence in 1962 and West Papua's been colonised since 1960s and I think it's important for us to stand up for our Pacific brothers and sisters and we ask as a Pacific Leaders Forum that they consider working through putting West Papua on the decolonisation list."

Indonesia's Ambassador to New Zealand, Samoa and Tonga, Tantowi Yahya, was alongside Mr Joku at the heated press conference where local journalists were taken to task. He was later asked if it was reasonable to expect Samoan and Pacific journalists not to ask questions about West Papua.

"No, it's not our authority to say that, but our concern was only that we are afraid that those quote unquote additional issues would overshadow the main objective of the conference."

He told ABC that Indonesia sees reporting from international media in regards to West Papua as unbalanced.

"In many ways what happens lately, many that speak of Papua do not really know what happens in Papua today. In other words, they are not well equipped about the information in a balance manner. They have been pampered with informations, which sometimes are fabricated news, twisted news and even hoax and we from Indonesia don't really get the right chance to tell the people about what happened."

The General Secretary for the Pacific Conference of Churches felt the comments made by Mr Joku about West Papua 'doing fine' did not make sense. Reverened Francois Pihaatae was not impressed.

"Whatever the Indonesian say, I will never, never believe that something is fine in West Papua because we have evidences that that the living out everyday, the killing of the people."

"I think it's arrogant and we won't be bullied by people like the Indonesian representative and I think that it also shows just the sort of behaviour and the condescending behaviour that we are getting as Pacific when we should be standing together for our West Papua brothers and sisters. We should also be speaking out as a collective rather than as an individual."

The West Papua independence issue was not advanced at the Forum summit as hoped by supporters. But several Pacific countries plan to raise their concern about Papua to the United Nations.