Traditional iconic vaka damaged in a fire in the Cooks

The full magnitude of the wreckage to the vaka is yet to be determined.

The secretary of the Cook Islands Voyaging Society Cecile Marten is seeking donations to help restore the vaka, as the job is anticipated to be a long and expensive process.

Ms Marten spoke with Sela Jane Hopgood about the event that saw the blaze that broke out on board the vaka. 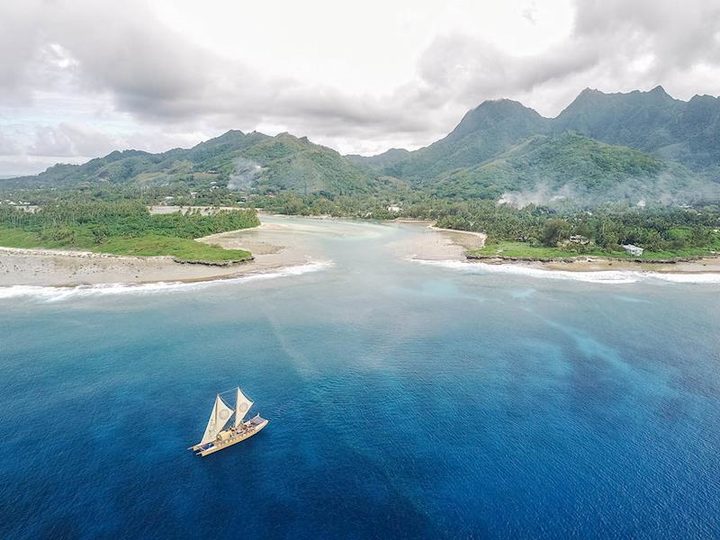 Although we are separated by Moana Nui O Kiva, it is the ocean that connects and binds us. We have already received so many messages of support, and wonderful pledges of assistance from those wanting to help. Photo: Marumaru Atua - Give a little page

CECILE MARTEN - So on Saturday the 2nd of September some patrons at the Palace takeaways, of all places, spotted a fire on board the vaka and alerted the police and the fire services. About 12:30am, 3 fire trucks arrived on the scene. The vaka had been parked down at Avatiu wharf. Normally it's parked in Avana, but we had some guests out that week, so it was parked down in Avatiu, which is quite fortunate because it meant that the fire trucks were able to attend to the fire. Immediately when the fire was reported, two of our executive members were able to go down to the scene and they were watching as the firefighters put the fire out. It took them probably just over an hour to put out the fire and then it took them about another hour and a half to actually pump the water out that was filled in the haul. After the fire was put out, the water was probably up to shoulder height for a normal person. It took them quite awhile to actually put the fire out and actually remove most of the water from the fire.

SELA JANE HOPGOOD - Anyone get injured in that fire incident?

CM - Um no, so the vaka had just been parked there. The crew had been doing some work earlier on during the day and basically we were just getting ready to take her back to Avana following week where she was, so there was noone there. It's unattended at night and the wharf is pretty secure and they did have security cameras and a security guard have just done his round about 20 minutes before the fire was reported in, so we're not sure what started the fire, but it must've happened quite fast because the security guard had been down there, done his rounds at about 12am and then at 12:20am the fire was reported.

SJH - So, there is now an investigation underway into the cause of the fire?

CM - That's right (to an investigation underway) so I checked today and the report hasn't been finalised. There's a lot of speculation about what happened. If you look at social media, people are liken to speculate, but we don't know what the cause is. Regardless of what the cause is, we just need to focus now on what we're going to do and where to next.

SJH - What damages have been made to the Marumaru Atua vaka?

CM - So the fire happened in the starboard hull. It was downstairs where the crew normally sleep, so on both sides of the hull you can sleep 8 passengers or 8 crew each, so it happened on the starboard side in the bunk house area, so the smell is pretty bad. It's very toxic at the moment. Completely black inside. The fire also escaped through one of the vents and has burnt one of the boxes on top of the deck and some of the deck has been damaged, so that needs to be replaced. We were fortunate we had one of the builders from Salthouse (boat builders, NZ) was here on holiday and popped down to have a look on Monday at the vaka and I just received a initial assessment that they don't believe that we can repair the hull. They're looking at replacing the hull completely, which is quite an expensive and long process.

SJH - How long will it take to fix the vaka, the canoe?

CM - Well that's the other question. We're not quite sure. The builders are busy at the moment. They're actually building another replica of our vaka, which is due to be finished before February 2018 for the New Zealand festival, which we have indicated that we were going to be a part of and we were just making plans for our voyage to New Zealand in November, so this is a bit of a huge blow, so we're hoping that we can find the funding to worse case build a new hull and we're hoping that the boat builders in Auckland, their mould will be available for us to do so, but we don't know yet whether they are in a position to be able to build a new one in time for the New Zealand festival.