A Samoan artist from South Auckland has won one of New Zealand's premier art awards.

Andy Leleisi'uao has been painting since the early-1990s and was named the paramount winner at the 26th annual Wallace Art Awards this month. 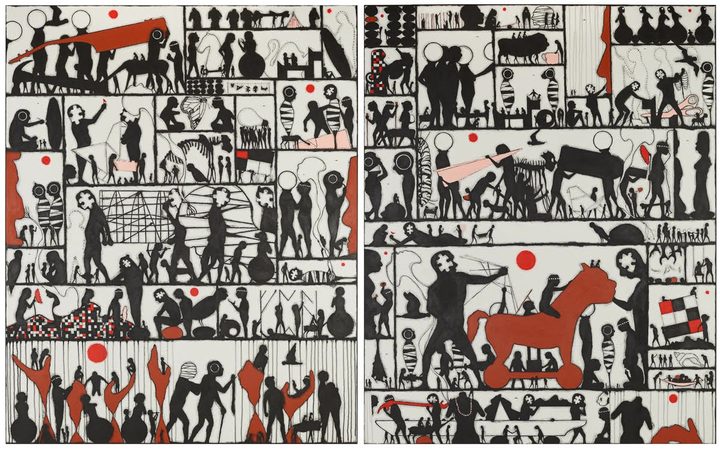 ANDY LELEISI'UAO - I think these accolades are great, but again it's whether we get it or not, whether we're fortunate to receive such accolades it doesn't really matter at the end of the day. What matters is that we keep going, we keep striving to helping each other.

SELA JANE HOPGOOD - So that would be what you would advised your Pacific artists...

AL - There's a constellation of us that are working and practising every day and these younger artists need to track down the artist they enjoy and talk to them, you know, just make time to have coffee with them because there's quite a few of us now and I think in order for them to grow and their work to grow further they need to just talk to these wonderful artists that we have while they're still around.

SJH - What work of yours was it that got recognised for the Wallace art award?

AL - It was the Harmonic People and its all about unity and collectively looking after each other and building a future together.

SJH - What inspired that?

AL - I think it's just one of those works that's gradually evolved from other work and being alert to what's happening around the world, but also being influenced by my family and friends.

SJH - You currently have an exhibition on running till September 15th in the city of Christchurch - What is it about?

SJH - In the description it reads, Andy explores his ideas of society in this work - what are your ideas that you explore through your visual work?

AL - Like love is more important than ethnicity and that's what my work is basically about. It's based on that foundation, based on alofa, aroha all those things and that's what I believe in and that exhibition in Christchurch reflects that and currently the work that I'm working on and that won the Wallace award reflects those thoughts.

SJH - What more can you tell us about these shows?

AL - It's pretty much this journey that I've been working towards, just finding things out and piecing things together, whereas the show in Fresh Gallery that's more social issues based. It's on child neglect.