New Zealand's Foreign Minister says Pacific leaders are determined to develop the economic potential of each of their island countries.

Gerry Brownlee made this comment after attending the Pacific Islands Forum leaders summit in Apia, where he was standing in for New Zealand's prime minister Bill English.

He told Johnny Blades that the Pacific Islands' leadership is well focussed on interacting with other countries to improve living standards for their own people. 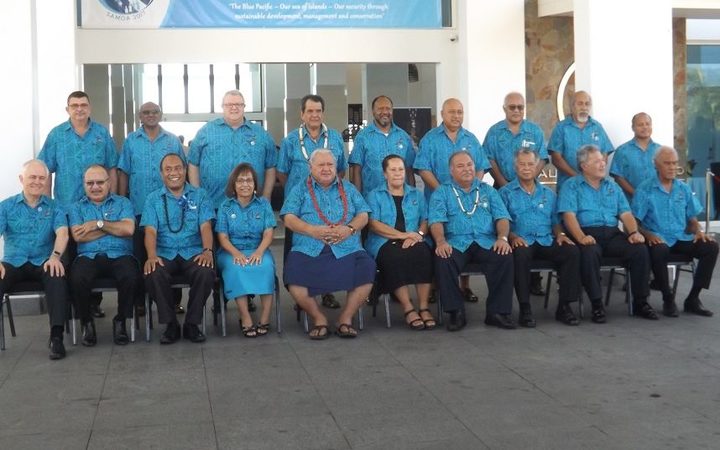 GERRY BROWNLEE: I think one of the stronger outcomes has been the commitment to further develop the regional security strategy and various countries will now look at what they can contribute to that with a view to first making some reccomendation to the Forum in the future.

JOHNNY BLADES: I note that in the security section of the communique as well as tensions in the North Pacific you have got West Papua. Just a small wording in there but saying about continuing dialogue with Indonesia. What is that about?

GB: It is predominantly human rights issues. But of course if you think about Timore Leste started out as being a similar dialogue with the Indonesian government and it think what it is really saying is no desire to see this escalate into out and out warfare. But concern about the situation there and wanting to make sure that the lines of communication remain open. So that there can be a good discussion about how people live in that part of the Pacific.

JB: When you say not wanting it to escalate to warfare. You mean.

GB: Well perhaps that is a little extremist on my part what I should have said perhaps is not wanting to see this develop into any significant conflict that would adversely affect the way people live.

JB: The banning of or at least the move to sort of look at getting rid of plastic bags and plastic that is an interesting one isn't it? I mean is it something New Zealand supports? Is it realistic?

GB: Well New Zealand certainly does not support the idea that you can just abandon any amount of plastic into the ocean at any old time. We have got fairly sophisticated recycling programs here and what I would observe is certainly a lot of individual households now are much more concious about even purchasing product in various types of packages that contain plastics. And I suppose that is the way in which certainly our government would like to see things progress for there to be a natural rejection of too much plastic packaging and then a proper treatment of that packaging once it is in the disposal position. But across the Pacific they do worry very much about how much is just tossed overboard. There was some mention of the island I think further in the western Pacific sorry the eastern Pacific that has an extraordinary load of plastic that appears to on the currents just gravitate to that island. And when you think of all that volume of rubbish being in the oceans it is not a really healthy picture. So yea a fair bit of expression about that. And I hope that will lead to a commitment in many of those Pacific countries that is as in line with where New Zealand is at and it is also a rising standard of concern here in New Zealand as well.

JB: You know can New Zealand do a bit more on that front to help you know allay the plastic coming through?

GB: Well you know New Zealand is of course trying to close up all the recycling schemes it can. By that I mean, that seems like the wrong way of putting it, by making sure that the cycle of use is as closed as possible and you know I am sure that other Pacific Island countries will sort of adopt those sort of arrangements as well. It is certainly the expression that was there. In many ways what you need at the start of any of these new initiatives is the expression of what you would like. And then of course you back it up by action in your own countries. I think that is what was most encouraging about this particular issue.

JB: Do you see things getting better in terms of the Pacific Island nations being able to harness the benefits of their marine resources and look after the ocean at the same time?

GB: Yes the concept of the Blue Pacific that ran right through the various agenda items of the Forum is the concept of it being a continent in itself. We know that is not what it is. But if you think of it that way as a huge mass then your interest in its protection is increased and every island state made it very clear how important the ocean is to them. To their existence and to the heart of their cultures as well.

JB: Were there any announcements that you government came up with?

GB: We made a commitment there to an eleven-and-a-half-million-dollar program to make sure that Pacific airports particularly were brought up to international standards for security. New Zealanders as of course you know are great travellers but there is also the prospects of less than desirable people coming through the Pacific to other countries and so for them to maintain the international airlinks that they have got they do have to bring their airports up to a higher security standard and we have indicated that $NZ11.5 million over the next 4 years to help with that program.

JB: So which countries are these?

GB: Look you will have to go to civil aviation.

JB: That is okay.

GB: Hang on I can give you a proper answer on that. The program will be run by civil aviation out of New Zealand and with the Pacific Aviation Authority as well. And they will make choices about which airports in the Pacific get treatment on a priority basis.