The governor of Hawaii has signed into law a bill to generate enough funds to finish constructing Honolulu's elevated rail.

The project is years behind schedule and has been majorly cash strapped.

Lawmakers have had to scramble to find ways to continue to fund its completion as the cost is now billions of dollars over its original projections.

But not everyone is convinced the latest measure will go far enough. 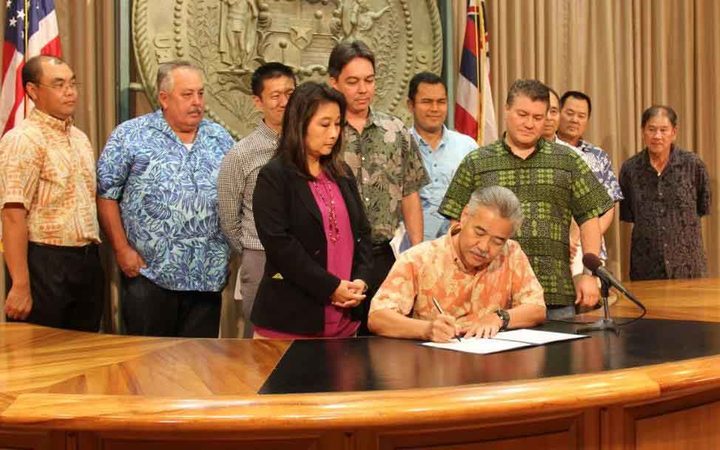 Hawaii Governor David Ige signs the bill into law on how to fund a Honolulu rail shortfall to complete construction. Photo: Supplied

The funding shortfall of US$ 3 billion is for a 20-mile elevated rail line with 21 stops. The line will link West Oahu to the Ala Moana Center that is a busy shopping and business hub. The new law hopes to generate a further $US1.3 billion by lifting the hotel room tax by 1 percent to 10.25 percent. And a further one billion is to come from Oahu taxpayers by extending a 0-point-5 percent general excise tax, or GET surcharge up until 2030. Hawaii's Governor David Ige signed the bill that is expected to raise the $2.4 billion funding package.

"I believe that this measure allows this most-important project for the City and County of Honolulu to move forward in a way that will allow it to be completed."

The project is now a city and state project and the signing of the bill coincides with the appointment of a new chief executive officer for Honolulu's Authority for Rapid Transportation or HART, Andrew Robbins. The governor says he's pleased a decision has been made.

"We did work over the weekend to complete the final legal review and policy review of senate bill 4 of the first special session for 2017 . As noted in some of the testimony there were some concerns raised, but there were no fatal flaws."

Honolulu city mayor Kirk Caldwell is known for his support of the rail and thanked the lawmakers for their efforts. He admits it is a controversial yet complex project and while he is glad there is a funding source he still has concerns.

"Part of that funding is now being placed on the taxpayers of the city and county of Honolulu in addition to paying the GET. I mean all of us been paying it for ten years, but we are going to be paying it until 2030. But in addition, additional operational revenue is going to be needed to continue to fund this project to get it to Ala Moana."

Mr Caldwell also says if any of the projections of earnings to 2030 are incorrect, or if tourist numbers drop, it has the potential to affect funding too. The project was launched in 2011 to much fanfare but since then many now feel it has become too costly. An editor of the Honolulu Civil Beat news service, Chad Blair, says the project's cost has skyrocketed 100% and this bill won't generate enough funds.

"Honolulu's has been quite something else. It was initially budgeted at $5 billion dollars and now its up to $8b, and now we are looking at $10b. My guess is that figure will climb. It does not currently include operations and maintenance - it is only for the construction - getting the project set up and finishing all the work."

Over a decade ago, (2006),  original estimates for the rail were costed at $US4.6 billion but now it is likely to exceed US$10 billion but by how much is yet to be determined. Also some hotels and accommodation providers on other islands say they are unhappy about having to contribute to Honolulu's rail project.