Entitled Tightrope, the poems are feisty and tell unique stories set in varied locations - from Avondale in Auckland to Apia, London and New York.

Sara Vui-Talitu went along to the launch. 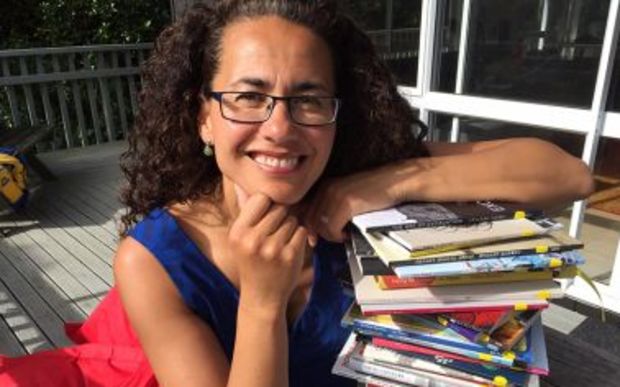 (On the occasion of reading 'with' Sam Hunt at the Parnell Rose Gardens, only to discover that 'with' was employed euphemistically to describe sharing the same venue, performing at different times.)

Published by Auckland University Press, this collection of 50 poems connects with not just a Pacific audience, but with all readers.

Of Samoan, Tuvaluan, and palagi descent, Dr Marsh has high poetry aspirations, even for her own children.

“Because I just want to take poetry into unexpected places because I really believe poetry is for the people and by the people and it is very cool and if it is the last thing I do, Im going to get one of my son's to write a poem. Keep it real baby, keep it real and relevant.”

The Pacific dance group from South Auckland, Coven performed at the launch.

“One of the dancers, Supreme Mistress, says they performed an original interpretation of one of Dr Marsh's new poems called 'Essential Oils for the Dying."

“Well Selina reached out to us and asked if we could activate the space for a performance so we decided to respond to one of her poems in the new book Tightrope and just do a response piece.”

If you're terrified of dying, if it

at every moment tightens its grip round

I will not give you myrrh

for the long, slow dying.

The brief was to incorporate life and death, and in memory of friend, Dr Teresia Teaiwa, who passed away suddenly in March this year.

Last year Dr Marsh performed a poem for the Queen at Westminister Abbey as the chosen Commonwealth Poet before 3,000 dignitaries and invited guests.

did you know that there's a London in Kiribati

We're connected by currents of humanity

like the dust of our bones, our final return to mud

means though 53 flags fly for our countries

they're stitched from the fabric of our unity

it's called the Va in Samoan philosophy

what you do, affects me

“I have read lots of her work and I'm a great fan but I think I should stay away from being effusive as she has written two poems about me anyway (laughs) that aside, it's great work and great writing. We have to find a place for our own values etc but we live in the world and english is a global language and you have to have a meeting ground and if we are to survive in the world today, the fanauaga will have to take the values and their language into the global conversation and I think this is another success for her as a spokesman for the Polynesian people.”

The launch coincided with National Poetry Day and the announcement for the next two years Dr Marsh is New Zealand's next Poet Laureate.

Paula Morris is a novelist and short story writer who teaches creative writing with Dr Marsh at the University of Auckland and says she will be a huge advocate for poetry.

“She's going to be be a huge presence on the poetry scene and beyond, she's already in schools and in the community doing all sorts of things for poetry and raising poetry's visibility and I think as Poet Laureate you are going to hear her speaking out in all sorts of public forums and really pushing the agenda about reading and writing and our culture here in New Zealand to another level. “