Danger zone around Vanuatu volcano could be increased

Authorities in Vanuatu say they could increase the danger zone around volcanoes on Ambrym if the drastic change in their activity continues.

Yesterday the alert level for the Ambrym volcanoes was increased from 2 to 3 for the first time since they last erupted in the 1940s and 50s.

No-go-zones have been declared for two and three kilometres around the active craters of Benbow and Marum respectively.

The manager of the Vanuatu geohazards department Eslin Bule told Koroi Hawkins it is very important that local communities, visitors and travel agencies adhere to the warnings to avoid being struck by volcanic projectiles or being exposed to volcanic gases, ash and other potential hazards. 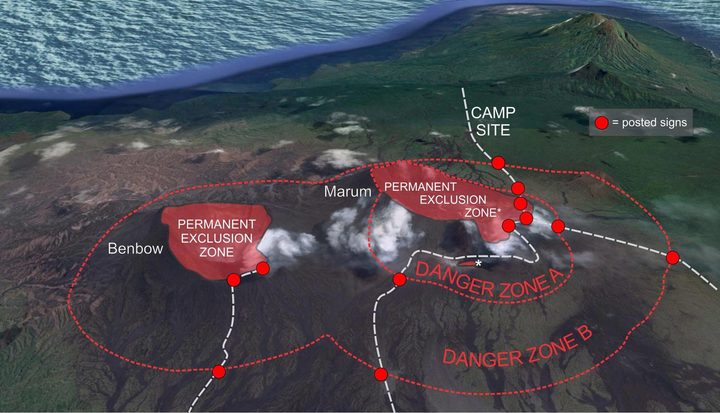 The manager of the Vanuatu Geo-hazards department Eslin Bule, who says the Ambrym volcanoes history of flank eruptions make them particularly dangerous and very unpredictable.

KOROI HAWKINS: How much activity? I noticed in your warning or your alert message you said it was quite a lot of activity. Is that more than you had normally seen?

KH: And for a lay person what signs depict Volcanic activity or what are you looking at? That is showing this?

KH: Right, and what are the risks and what are you telling the public, visitors obviously? I would assume the volcanoes on Ambrym are tourist attractions?

EB: Yes and we advise visitors not to reach the volcano craters. So there is a zone around the volcano area Zone A and Zone B that is on the map that you can find on our website.

KH: Yes and you are saying about two to three kilometres from either volcano.

EB: Yes, from the volcano vents. So so far this is what we advise and we are closely watching if there is, the level of activity doesn't change then we might expand the zone of expulsion.

EB: Ambrym volcano has a history of flank eruptions. So we want to closely monitor this and especially monitor the areas where past eruptions occurred on the flanks. So the activity is not only focussed on the main craters.

KH: So it has a history of erupting on different places around the.

EB: Around the island yes.

KH: Wow. Okay that sounds very dangerous. And at the moment how many communities or maybe even tour guides are running services onto Ambrym do you know?

EB: There was a group yesterday [Wednesday] that went up there. Tour operators there informed us. I am not sure how many of them. But there has been some people getting closer to the volcano yesterday.

KH: So not following your directive?

EB: Yes and no. They have been there and they were advised to stay in the ash plain. Not to go in the danger zone. They should not climb the volcanic craters. This was the advice that we told them. That we have issued a warning and you are supposed to stay out from, two kilometres from Benbow and three kilometres from Marum.

EB: I mean that increase is remain, like the increase is very slow. Because we noted the some things changing starting from the beginning of the month. But it was increasing very slowly to the stage where we issued this bulletin.

KH: Right so it is a really, really slow build up. But it could, the end result, I guess what I am asking is it could result in a mini eruption of some sort?

EB: Yes. There is a chance, there is a chance to have a minor eruption. From this activity and the situation that we are seeing now because. Since the beginning of the month it didn't stop to gradually increase.

KH: Yes, so there is a lot of pressure building up.

EB: Yes, so to which point it will stop we don’t know. It might build up until there is an eruption before it calms down again. So this is possible.

KH: And has Ambrym been at a level three before in recent times?

KH: Yes that is quite a long time ago isn’t it?

EB: Yes it was quite a long time ago. And then since we start to monitor this we have never been up to level 3 for the last twenty years [when they started monitoring].

KH: And how high does the alert levels go?