As Yazaki EDS winds down its operation in Samoa, a local union is aiming to ensure workers receive all they are entitled to before the company leaves the country.

Samoa First Union has been working with the International Labour Organisation to sign workers up for industrial representation. 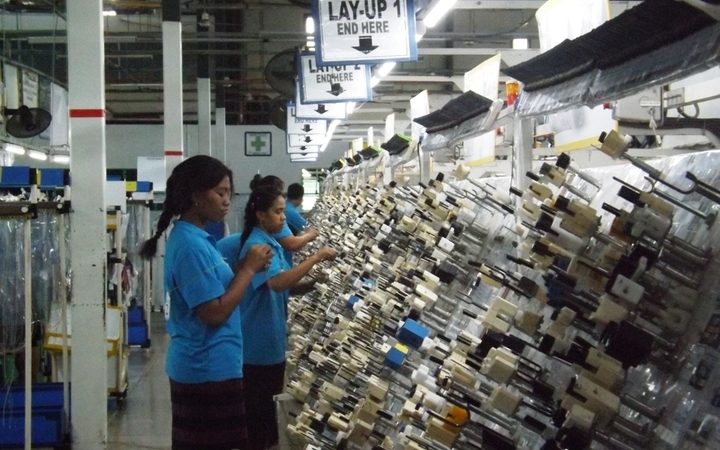 The union representative looking after the Yazaki workers, Saina Tomi Setu, says they need to check all employer contributions have been paid to the National Provident Fund.

She says employers and employees each contribute 7 percent to the superannuation scheme.

Ms Tomi Setu says Yazaki workers have come to her with payslips showing employer contributions have not been made in full.

She also says the redundancy settlements received by some workers do not reflect the full pay-out agreed with the parent company, Australian Arrow, in July last year.

"All workers in Samoa will be looked after. They will get the same entitlement as workers under Arrow collective agreement, but there are some difference from that agreement with the package that Yazaki workers got right now."

The union's Michael Afamasaga says it's quite clear in the agreement as to what the workers are entitled to.

"It's stated in the retrenchment statement that they should be paid if the worker hasn't used their leave, the Yazaki management should pay the maximum of the hours given in the agreement"

Mr Afamasaga says the full pay-out of both annual and sick leave is included in the agreement, but sick leave entitlement has not been included in pay-outs to some of their members.

Around 400 of the Yazaki workforce have their last day on Friday August the 25th with the remainder being retained until the end of October.

Saina Tomi Setu says the closure is traumatic for the community with many families deriving their only income from the factory.

"For example, there is a mum and a dad with a son, they were all working in Yazaki. So all of them are not going to be working again. There are two sons, they are the only to earn income for their family."

But there is some good news emerging from the Yazaki industrial site at Vaitele.

A family-owned New Zealand manufacturer, Fero, is setting up in Samoa and will be offering positions to some of those skilled workers left jobless.

Fero produce wiring units that fit into products such as parking meters and police cars.

The company aims to start manufacturing at the former Yazaki site.

Fero's general manager, Sam Fulton, says the company has a growth strategy for their Samoa operation which gets underway on the first of November.

"We're looking at an initial kick-off with between 50 and 70 staff. It's our goal to be employing 200 staff within 24 months. There's a bit of dependency on the amount of work that we can secure for the plant and we'll be looking towards the Australian market for that."

Samoa First Union is involved in negotiating employment with the new manufacturer.

Another company, Samoa's Sleepwell International, has announced plans to start manufacturing beds and furniture at the Vaitele industrial site as well.

One of its directors, Aumua Ming Leung Wai, says the joint venture is between SSAB of Samoa and Sleepwell's Lutu brothers.

"The plan is for Sleepwell International Ltd to set up a bed and furniture factory in Samoa, mainly for export. We are hoping to rent part of the Yazaki building and employ up to 50 people to start off with. And we're looking primarily at those who used to work for Yazaki."