The chair of the Solomon Islands' Chamber of Commerce and Industry is calling on government and the private sector to focus on creating 10,000 new jobs every year to keep up with a rapidly growing population.

Jay Bartlett says Solomon Islands population is growing at a rate of 2.3 percent and by 2050 will have doubled its population of around 650 thousand people.

According to the World Bank in 2016 Solomon Islands had the highest rate of unemployment in the world at 31.4 percent.

The central bank says only 26 percent of the population of more than 650 thousand people have bank accounts and less than 20 percent are registered taxpayers.

Jay Bartlett says 7 out of every 10 Solomon Islanders are under 30 and the country's main focus should be on creating jobs.

Mr Bartlett this week signed a grant agreement with the ministry of women and youth to establish a Young Entrepreneurs Council which he hopes will be help young people turn innovative ideas into business opportunities. 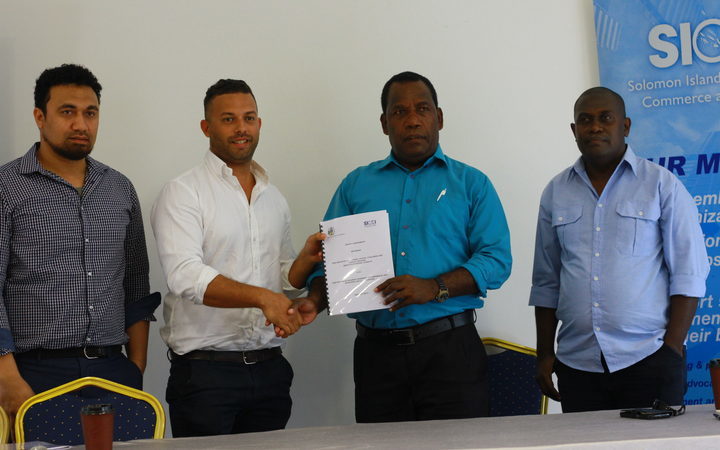 JAY BARTLETT: The platform for our young leaders and a network for them and an avenue for them to advocate issues that are important for them. Because our young people represent such a big part of our population. Seven out of  ten, 70 percent essentially is under the age of 30 and so there is a big population a big youth bulge and you know I think it is important that young people have an avenue and a platform for their voice to be heard. And I think that is why something an initiative like the young entrepreneurs council is important.

KOROI HAWKINS: And also I have seen figures that unemployment in Solomon Islands is among the highest in the world as well. So entrepreneurs would be a very important, not just play an important part in the economy but also in terms of livelihoods.

JAY BARTLETT: Yes the issue of unemployment is I think a huge concern or something that we should be focussing on not just governments but private sector, civil society, the churches. You know we need to get our young people engaged we need to get our young people opportunities for work to get a better life for themselves. There is always a lot of discussion about nation building and peace but those conversations cannot happen in silo. We need to be talking about how do we create jobs for young people because essentially investing in our future generations for me is investing in peace, is investing in stability, is investing in security and is investing in prosperity. And I just see such a huge need there for employment and you know the way our population is growing. We are growing at a rate of 2.3 percent. By 2050 Solomon Islands would have doubled its population and at the current rate of growth we need to be creating 10,000 jobs a year and I think that is something everyone should be focussing on is creating 10,000 jobs that is kind of where we are passionate about.

KH: Yes and how would this council work? If I were a young entrepreneur how would the council be able to help me?

JB: To be quite honest we are still in sort of preliminary stages, yesterday we signed a grant agreement with the ministry of youth women and children's affairs they have given us a grant that will help us establish this. The mechanics of this haven't been fully thought through and that is something we are currently working on at the moment. But essentially the concept is to get young entrepreneurs thinking on a board level thinking on governance level, thinking about leadership business and long term. And this council could be a representative voice for some of the smaller start up businesses, which may have different needs to more established businesses.

KH: And I guess one of the big things about Solomon Islands is that so much of the development so much of the money is centred around the capital. How much of this council would be looking towards other provinces and people in rural areas?

JB: You are right I mean it is Honiara centric all the development is centred around the capital and that is one of the challenges we face as a country being so geographically dispersed. Being able to gete development out in the provinces is always going to be a challenge I think and this urbanisation of people moving to Honiara to look for opportunities, better opportunities is obviously something that long term we should be trying to address. Right now I think our focus is mainly on trying to get it established. Get a good group of like minded young people together and just see what happens and see what comes of it and get some momentum.