Papua New Guinea is celebrating back to back AFL International Cup titles after a nail-biting 29-28 victory over New Zealand in the grand final.

After losing their first match of the tournament, the Mosquitoes won four straight to become the first team to successfully defend the title.

Coach David Lake told Vinnie Wylie he had to keep the sideline calm as a behind proved enough to win the game in the dying moments. 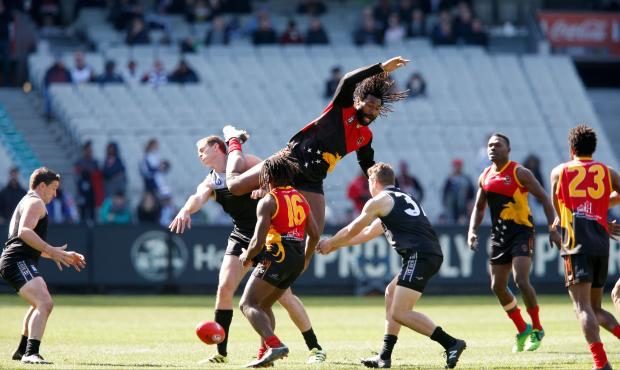 DAVID LAKE: Honestly in that last piece the young fella that ran into the open goal and hit the post he did that in the game against Ireland, which probably cost us the game as well but if he'd have kicked that goal the ball went back to the middle and there would have been a goal in it and for the Kiwis that would have meant an opportunity to get back to the middle of the ground to restart...so maybe kicking a point, in reflection, was a good thing because they had to go the full length of the ground.

VINNIE WYLIE: It's those fine moments, those things that maybe in the moment you don't realise how crucial they are and you look back at the Kiwis beating Ireland, which put you into the final, and of course nicking it there at the end in the grand final in what was a tight one. All these tiny little sliding doors moments that add up to a big thing like winning the Division 1 title.

DL: Yeah it was really crazy. From New Zealand's point of view I know they set their goals to win every game...but I sort of look at that final (round robin match) and it's almost like Barclay (Miller from New Zealand) should have just kicked it over the boundary line, kicked it out on the full (and accepted a loss to deny PNG a place in the final) and they would have played Ireland again, who were down to 16 fit men - they were really battling to put a side on the field that last day - and that would have been their opponent who they really knew rather than the unknown, which was us. It was interesting because they'd set their goals a certain way they chased them. I wonder whether they'd have been better off not winning that game.

DL: I said to the boys after the game - and I'd sold to the before the game it was the haves vs the have-nots but I said you live your life as have-nots so don't let this be any different and fight like you'd fight if it was day to day. You hope from this that companies want to get involved and sponsor the competitions and that the AFL continue to put money into development at the junior level and we continue to create players like young Ace (Hewago 'Ace' Oea) - that's good evidence the AFL money needs to be invested in development and the other money, the sponsor money - the corporate dollar - needs to support senior footy. I think there's ten years work that was in that side - as I said from 29 to 16 was the spread and the 16 year old played every game and every moment, as did the 29 year old and everything in between. We have all the layers of talent now and if we continue to invest heavily in development I think you'll see that the game could grow and some good things will happen around young Ace over the next few weeks, I reckon, and that just helps promote opportunity. I think it can grow significantly and it's just about putting money and resource into right places because they're absolutely amazing athletes and they're tough as nails.

DL: No, all emotional, all emotional. There's no prize. I think the prize is when you go back to country that I hope that the people that do sponsor and put in money is that they offer them work opportunities and they get recognition to help them move forward in their lives, which is probably more significant. If you gave every player $1000 he each celebrates (but) if you give him a job he can earn $1000 - in PNG that might be every month. Give him opportunities, teach him to fish and you hope that's what comes out of this significantly.