Guam's governor Eddie Calvo says his island is prepared for the worst despite an assurance there is only a one in a million chance of the US territory being hit by a North Korean nuclear missile.

This comes as the North Korean leader Kim Jong Un says he is reviewing plans to strike waters near Guam.

Mr Kim says he will watch the United States for a while longer before making a decision. 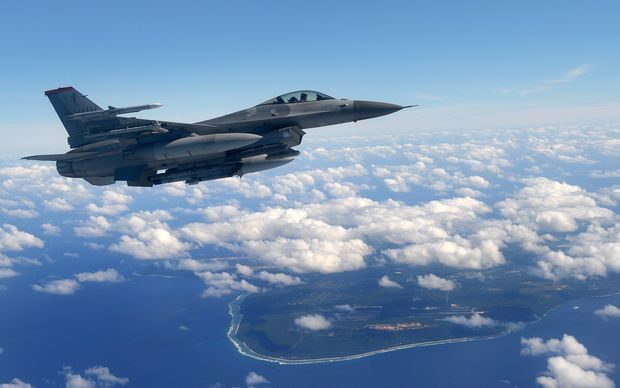 Radio stations on Guam reportedly tested emergency broadcast procedures this morning, after the US department of Homeland Security distributed flyers with advice on what to do in the event of a nuclear attack.

It says not to look at the flash or fireball as it can blind you.

"Though the threat level has never changed you have to provide this information. It's not different messages, it's understanding where we are at right now. Then again, even if there is one in a million chance it’s a job of the leader, of the government that we're properly prepared for any eventuality."

The one in a million assurance came from Guam's homeland security advisor George Charfauros, who says the anti-missile system set up on the island in 2013 stands ready to fire.

"The chances of a missile getting through our various layers of defence, both the US military and our allies - the Japanese self-defence forces and the South Korean defence forces, in my confirmation is 0.0001 percent, and that's just for this unclassified stuff."

But while authorities are quick to downplay the threat from North Korea, the Director of Guam's visitor’s bureau Jon Denight says the negative publicity is being felt in the tourism sector.

"We are getting this attention and we are getting a lot of inquiries at our offices in Japan, Korea, China office and Taiwan office and our offices where we have GBB offices. Tourism is a very competitive industry and people's decisions can be swayed by negative information likes this. That's why it's so important to get the correct information out to our potential visitors."

Dozens of Guam locals joined a peace rally on the busy streets of the capital Hagatna yesterday evening. One of the rally's organisers was Kenneth Gofigan.

"Any nuclear attack could be the catalyst for World War 3. The thing is though, peace can begin here. We want to show a message out to the world that peace is the only option that we we want. We do not want to be the victims of nuclear bombs we do not want to be put into a situation of existential worry for our lives."

As Guamanians prepare for the end of school holidays later this week, North Korea's leader Kim Jong Un has called for the US to ease tension and prevent a military clash.