There is a push for the Pacific Islands Forum to develop a regional foreign policy to counter expanding risks in the Pacific.

The challenges were discussed by the region's foreign ministers who met in Fiji as they prepare next month's Forum leaders summit in Samoa. 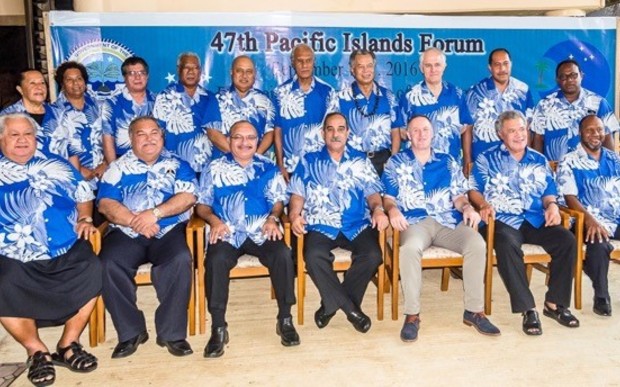 Leaders at the Pacific Islands Forum in the Federated States of Micronesia in 2016. Photo: PNG PM media

Since 2000, the Biketawa Declaration defined the Forum's collective approach to security in the region. Drawn up after the coups in Fiji and Solomon Islands earlier the same year, it was invoked to dispatch a regional assistance mission to Solomon Islands in 2003. Samoa's deputy prime minister, Fiame Naomi Mata'afa, says the talks in Suva have widened the security perspective.

The Pacific island states cover an area twice the size of the EU and ASEAN combined. For Fiame, this gives the Pacific clout and warrants a change of how it presents itself.

FIAME NAOMI MATA'AFA:  It's really about the narrative, how we present ourselves to the world, but more importantly, what we are claiming for ourselves.

Fiji's defence minister Ratu Inoke Kubuabola says new global trends posed new threats, which should lead to rethinking the concept of security to go beyond defence and law and order. He says this new approach - tentatively labelled Biketawa Plus - should be more forward-looking and also encompass a regional approach to disasters. While climate change is a concern at the forefront of everybody's minds, Fiame also pointed to the nuclear test legacy of the US military

FIAME NAOMI MATA'AFA:  US responsibility towards the containment and management of nuclear waste threat - and it's not only a Marshall Islands issue. It becomes our issue.

In her address, Australia's foreign minister Julie Bishop vowed to step up its engagement in the Pacific, confirming Canberra's roll-out of more aid for maritime security.

JULIE BISHOP:  More boats, more resources, more training and better laws across the region to do with some of these global challenges we see in our region.

RATU INOKE KUBUABOLA:  As Pacific member States of the United Nations, we must commit to complying with our obligations under international law and treaties, and ratify Conventions that will create a more just and secure world.

The ambition contrasts with the approach taken by some Forum members. Australia refuses to comply with the refugee convention and Ratu Inoke, who is also Fiji's immigration minister, just recently flouted the Biketawa principles by allowing Chinese police to extract dozens of suspects from Fiji without court scrutiny.