Violent arrests have been reported at the Australian run refugee detention centre on Nauru.

The Refugee Action Coalition has released video they say is of the violent apprehension of peaceful protesters which took place yesterday (Tue 8 August).

A spokesperson for the coalition says the protest was prompted by recent revelations about Australia's prime minister and the US president.

The transcript of a telephone conversation shows Malcolm Turnbull telling Donald Trump he's not obliged to accept any of the refugees detained on Nauru, despite their resettlement agreement. 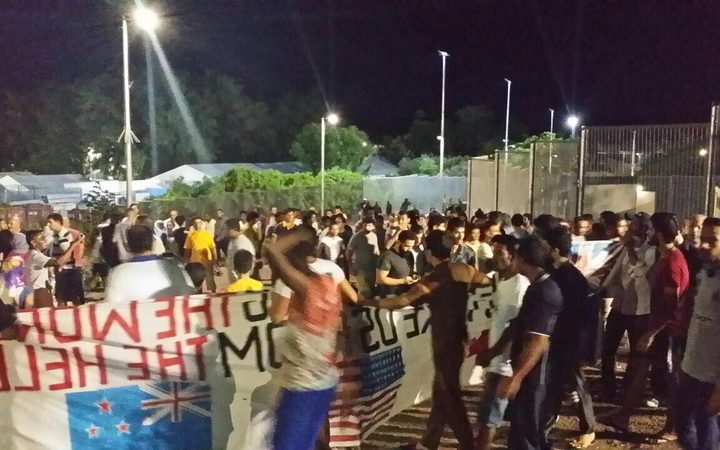 IAN RINTOUL: When the US officials left Nauru and the declaration that the quota had been finished in the US until at least October, more and more people were convinced that there was nothing substantial in the US deal. With the revelations that came out of the conversation between [Malcolm] Turnbull and [Donald] Trump and to actually hear Turnbull effectively tell Trump that he didn't have to take anybody, it compounded the concerns on Nauru. And there is a mixture of disappointment, despair and just straight out anger that people have been left now without any kind of hope. And we've seen an escalation of the protests across Nauru since then, both demonstrations at the settlements and unprecedented demonstrations at Beach House and now at OPC 1 which is really the engine room, the administrative centre, of the whole detention regime on Nauru.

DOMINIC GODFREY: And reaction from Nauruan police starting to get stronger to this protest, is this a sign of worse things to come do you think?

IR: It's not a good sign at all. There's been increasing repression from the police. Initially the police's attitude was - well as long as they're peaceful protests, you know nothing's going to change but you can have your protests over there and just keep out of our way - that's turned into much more active repression now. People were arrested at the demonstration outside OPC 1, there were two others who were arrested last night in police raids on the Fly Camp, OPC 2, with allegations that they had been previously involved in the demonstrations. So there are at least five people, there could be more, but there are at least five that we know of who are still in prison in Nauru as a result of being involved in peaceful protests.

DG: And the video that has emerged from yesterday's protest showed some fairly violent reaction from the Nauruan police. Have you heard anything about the welfare of the prisoners involved there and that were arrested subsequently?

IR: We haven't heard anything directly. People have gone to the police station to try to bring food, to bring water, to check on how people are because there were at least two people at the protest that were quite badly beaten, according to witnesses who were there, and they were very concerned about their welfare but they'd not been able to see them at the police station and the people were going back this morning. Again, to see whether there was any way to get them out, to check on their welfare, bring food or other necessities for them but people are very concerned that the police are taking a far more aggressive attitude. And the attitude seems very much like the kind of mass repression that was unleashed by the Nauruan government against refugee protesters in 2015.