PNG has a new govt but questions still about legitimacy

Despite the emergence of a government in Papua New Guinea, questions remain over the legitimacy of the general election.

After his People's National Congress emerged as the party with the most MPs from PNG's lengthy national election, Peter O'Neill gained enough support in the parliament to begin a second five year term in the position. 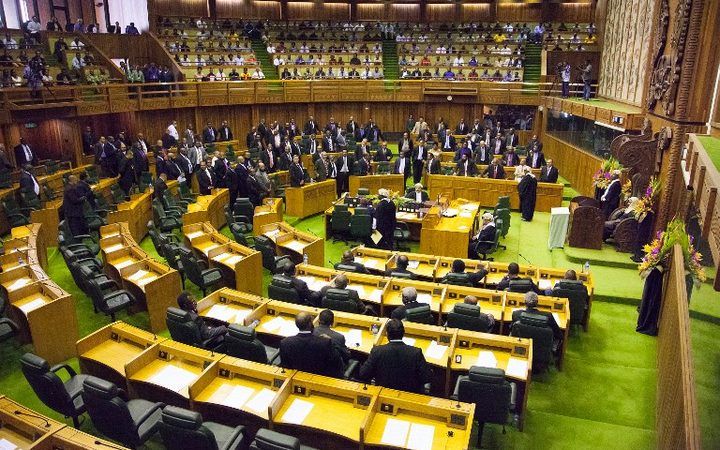 Peter O'Neill was able to win the vote to be prime minister 60 to 46, a significant decrease in the majority that he commanded in the past term. It's unclear who the nominee would have been from the opposing group known as the Alliance, based around the next two biggest parties - the National Alliance and the Pangu Pati - but this faction stayed intact from its pre-parliament camp. The vote took place in near solitude, a far cry from the chaos in which the tenth parliament began. The sitting had barely begun when it came to an impasse when two men claiming to be the MP-elect for the Gumine seat, Nick Kuman and Lucas Dekena refused to leave the chamber. It prevented the Chief Justice from swearing in the MPs-elect for an hour, prompting scenes of anger and confusion as dozens of MPs called for parliament to be adjourned. Despite the National Court having granted an order to stop both Mr Kuman and Mr Dekena from participating in parliament, the former proceeded to be sworn-in aLyway. The Electoral Commissioner Patalias Gamato says he recognises Mr Kuman as the winner.

"So what happened was.. after eliminations were done, Nick Kuman was leading, and then they deducted 412 votes from Nick Kuman to reduce his number for Dekena to come in. But you cannot take away votes after the elimination process. So I had to restore Nick Kuman."

Mr Gamato admits the Electoral Commission made a mistake in naming Gumine's returning officer as someone who is dead, which cast further doubt on the declaration of Mr Kuman. Gumine is the second case of a double declaration after this year's polls, just the latest in a long list of inconsistencies in this lengthy election. The Registrar of Political Parties and Candidate, Dr Alphonse Gelu says the hasty return of writs last Friday, when results in almost a third of the parliament seats were not cleared, was highly questionable and created confusion.

However Mr Gamato says there was a pressing need for the writs to be returned in order to keep within the term of parliament. He disagrees that the Electoral Commission was not prepared enough for this election, but doesn't deny that many people were disenfranchised from voting due to flaws in the common roll.

"2016 we committed the entire year to do the work on the roll. Unfortunately the funding for the roll updating was not done on a timely basis for us as the electoral commission to work on the roll. So I think that was the main area of concern."

With results still to be declared in several seats, the shape of parliament is yet to settle. A high number of electoral petitions is expected in the court of disputed returns.