Plans for Tokelau's admin office move to be presented next week

The Ulu of Tokelau says frustrations have prompted renewed calls to move the territory's administration office from Samoa to Tokelau.

Siopili Perez says it's a long overdue issue for Tokelau and the fono has made it a priority.

Mr Perez spoke with Dominic Godfrey about the progress that's been made and what he's expecting at the meeting of the general fono next week. 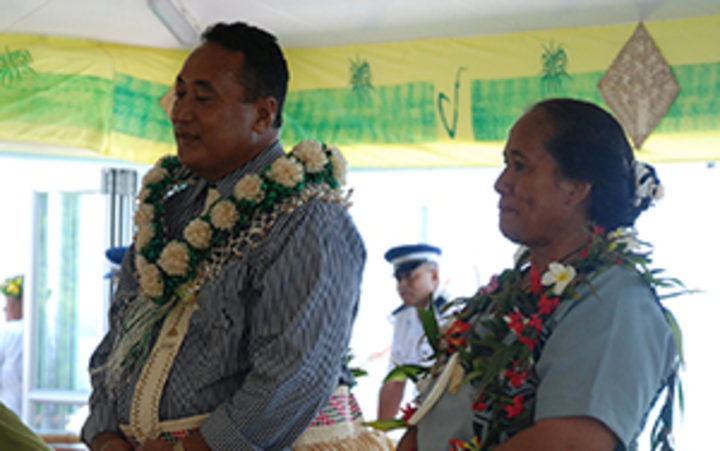 The Ulu of Tokelau, Siopili Perez, and his wife, Taase Perez, at their inauguration. Photo: Supplied

SIOPILI PEREZ: We have asked our new public service commissioner to look into the structure; how can we best function the office and at the same time bring back the main core of the office to Tokelau.

DOMINIC GODFREY: So what are the main issues with bringing it back that need to be overcome?

SP: Look, I don't know how you would feel with the administrative office of New Zealand being based in another country. To me, it's not on. Why do I need to pick up my phone and ring my adviser in a different country on a day to day basis? These are the frustrations that I have personally and it's why we need to bring the office where the people are, where the ministers are based on the island. I meant what I said in my opening speech, inauguration speech at the beginning of the year. It's not on, it's about time our offices came where the ministers and the leaders are based, on Tokelau not in Samoa.

DG: What timeframe is Tokelau looking at for the movement of the office?

SP: The commissioner, he'll come up with a report in two weeks' time. Not all the services need to come. Transport and recruitment need to stay there for our delivery of services and goods but all other functions I believe need to come so the commissioner and his team are looking at how to best structure services for Tokelau.

DG: Will the commissioner also be looking at the budget in terms of what the implications are financially?

SP: Everything. Everything else. It's more much of a structure 'how' so I don't see a point of major restructuring in terms of infrastructure.

DG: You mentioned transport and also with infrastructure, have you looked further at developing airstrips?

SP: The airstrip, it's always been in the mind of the general fono. We need to discuss it as a whole package, the whole picture of how can we check all the solutions of our transport Dominic. The issue of air service has not been put away completely by the general fono and taupulega, it's still much alive.

DG: And with regard to the helicopters that were purchased, have they been sold yet?

SP: Dominic I wish I could comment more on this. The issue is still under investigation. Hopefully, as I mentioned we have a parliamentary sitting in two weeks' time, hopefully the commissioner and his lawyers will have something for us for him to address and update on the issues Dominic.

DG: Okay, I take it they haven't been sold in that case?

SP: It's been assigned by parliament to the administrator to look into how we can best sell that to get our money back.