Sogavare yet to deliver on promise to tackle corruption

With only a year left in his term, the Solomon Islands prime minister Manasseh Sogavare is running out of time to deliver on a promise to bring in new anti-corruption laws.

Shortly after his election in 2014 Mr Sogavare's coalition government released a policy statement prioritising a host of anti-corruption initiatives for which there was a lot of support from the public.

But as Koroi Hawkins reports the prime minister is struggling to see the reforms through. 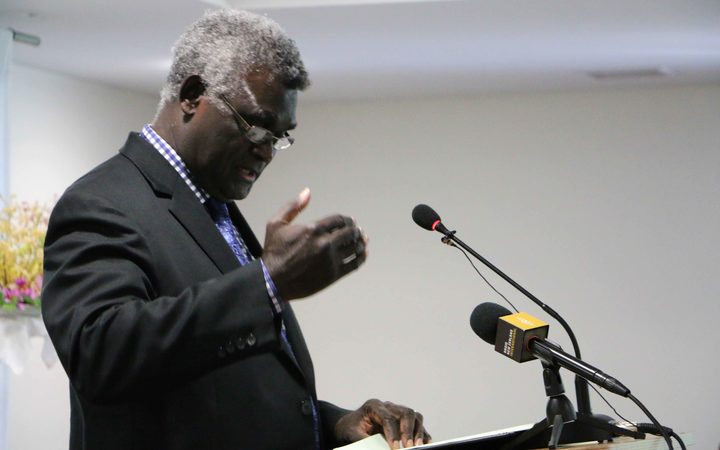 Manasseh Sogavare speaks at a high-level symposium on the legacy of RAMSI. Photo: RNZ/ Koroi Hawkins

Manasseh Sogavare delivering his acceptance speech on the steps of parliament in Honiara in 2014 - "I am very humbled by the mandate that parliament has put on my shoulders, once again to lead our country Solomon Islands..."

Manasseh Sogavare's election as prime minister in 2014 was welcomed by anti-corruption advocates as a real positive. Mr Sogavare had been very vocal in parliament about the need for quality leadership and true to his word, he made fighting corruption a reform priority. Speaking at the last parliament sitting about the Solomons' future Mr Sogavare again called for unity in leadership.

"It had to take the near collapse of our country Mr Speaker for us to with the reality of our very weak state of affairs. We are here Mr Speaker to celebrate the dawning of a second chance to get it right. However our exciting challenge Mr Speaker is to continue to consolidate the good work that RAMSI has done. This is where Mr Speaker our united effort is called for."

Central were several bills that aim to establish an independent commission against corruption, introduce freedom of information laws and protect whistleblowers.But the chairperson of Transparency Solomon Islands Ruth Liloqula says there have been issues getting them through parliament.

"None of them have been passed. Everytime he takes the Bill to parliament he doesn't have any support. Everyone decided to leave them or there is a crisis in government. So the Whistleblower's Bill and the Independent Commission Against Corruption Bill those ones are now, have been tabled for first reading, they are still stuck there."

And Ms Liloqula says this lack of movement is very suspicious.

"All he needs is his government's support and he has the numbers that is why he is in government. And there are people in the opposition and the independent who are willing to support that. So I do not know what the problem is."

The hold she refers to is rooted in the fragmented nature of Solomon Islands politics with its weak political party system. This results in fragile coalition governments formed almost on a person to person basis relationships, reportedly sealed with money, political appointments and promises of overseas trips. If Mr Sogavare completes his full term, he will be only the second prime minister to have ever done so in the 39 years since independence. There is some hope for the anti-corruption fight in Solomon Islands though, the local police force have set up their own task force working with the Ministry of Finance. It has made some high profile arrests including that of the permanent secretary of the ministry of police, national security and correctional services Edmond Sikua who was charged in February with seven counts of official corruption for paying a company registered to his daughters more than $US80,000 from ministry funds. The police commissioner Matthew Varley says the taskforce, which is code-named JANUS after a Roman God, is playing an important role.

"We have demonstrated that we are investigating cases of corruption. And we will continue to do that if people break the law. And I think that the public expects that that the public wants to see that from the police force. But likewise where we have had cases of police doing the wrong thing we have taken disciplinary action there as well."

But allegedly corrupt public servants are just the tip of the iceberg as a local busienssman and chairman of the Solomon Islands Chinese Community Association, Matthew Quan, explained.

"Yeah everyone here in the Solomons do accept certain things that do happen if you dont help out another person in anyway things just happen a little bit slower. Then you become over the top where people are expecting things to happen. Yes anyone who is anyone in this place who can we won't say manipulate but we certainly get things done yes they will be in that, in that side of things as well."

The legislation proposed by Mr Sogavare aims to address corruption in all sectors in Solomon Islands public and private life but if corruption is as entrenched as Mr Quan says it might explain why the prime minister is having such a hard time pushing it through. But Ms. Liloqula says the prime minister continues to promise that he will deliver.

"During the national peace summit the prime minister again assured the nation, because the session was broadcast live, that those two bills would go before the parliament this year, so we are waiting to see whether this will happen or not."

According to the National Parliament, the next election is tentatively set down for early in 2019 so Mr Sogavare still has time to get the bills passed.But even if he does it may be up to the next government to see the laws through to implementation.