Members of a key electoral body which can assess where there could be grounds to fail Papua New Guinea's national election in certain electorates have resigned as a collective.

As PNG's lengthy election has entered vote counting stage, complaints about a faulty electoral roll and irregular ballot distribution have created pressure on electoral officials to declare a failed election in some electorates.

But this week the Electoral Advisory Committee's three members resigned only a month into their job.

One of the committee's members Richard Kassman explained that they could not do justice to their role because the Electoral Commission had not allowed them access to information they required to assess the election. 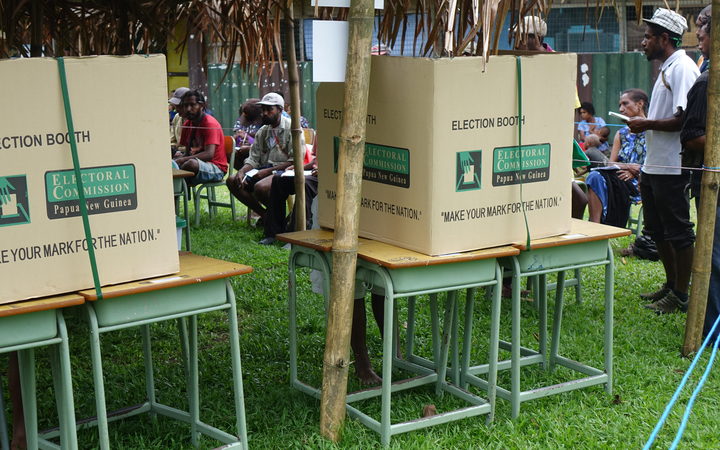 RICHARD KASSMAN: At the end of polling, when counting started, we were anticipating that we would have access to a centralised collating system, so we could track - through the Electoral Commission - the process of counting, and the summaries of counting. This is what we call basic information that we wanted. And we were very clear that we did not expect, nor did we design, any specific reporting templates for the EAC because we felt that we could hook into basic, rudimentary and regular reporting processes within the Electoral Commission. Our process was that we would start with what we called an issues register, and we would make enquiries. Well, first we wanted the baseline data, and then we would make enquiries on specifics that we may hear where there were issues. And the next stage would be for us to write. And where we identified issues, we would reclassify that as a case. And these would be the ones we would go into with a little bit more rigour. So we identified at least four in that short time that required further... elaboration and investigation on our part. And our information came from observers and also from mainstream media and digital media. So we wrote specifically on two particular cases, saying can we get the commission's report on these ones. And we felt that was where then if it verified, if the information that came from the commission showed that this was an area of concern, then we could dig deeper into it. Because we knew with 111 seats across the country, we needed to focus on exceptions, not the 111, and not basing it on information coming from the media alone.

JOHNNY BLADES: But you were unable to get this information on this from the commissioner.

RK: From the commission, yes.

JB: Because they were too busy, they said?

RK: I granted they would be too busy. This is why it was important for us to make this stand. We anticipated that if we could get the base data from the regional managers, anticipating that within the commission themselves, they have a reporting process where daily reports are coming in on this. On counting for example: the total tally of counting per day. For example, just in theory: if you have an electorate with 40,000 (people) on the common roll, one would assume they sent out 40,000 ballot papers. If a member was elected and in the declaration process it was calculated that 60,000 people voted and he was declared on 30,000 plus 1, then there was an issue. 40,000 on the common roll, 40,000 ballot papers gone out, 60,000 ballots counted. The commission thought that if we were receiving regular reports, had that baseline data of common roll and ballot papers gone out, and then perhaps we had the opportunity to blow the whistle a little bit earlier, the commission then may send an expert out from Port Moresby for example, or another province to go and have it independently verified and say well in actual fact the figure on the common roll should have been 60,000, it's all hunky dory... or alternatively, oops there is a problem, we need to check this and stall this until such time as we understand what's going on. We felt that was the basic role of the committee. There's allegations of conspiracy and lot of the usual behaviour. These are matters that should be referred to the court of disputed returns or referred to the police. We clearly didn't have the capacity to do that. Nor did we feel ourselves that that was in our ambit. We wanted to look at key things very much tied to normal processes, and we had opportunity to intervene.

JB: So because your committee was looking at the electoral process and where it may have been hindered or what not or disrupted, is it not a disruption or obstruction of the process if this information is not available itself? Is that not grounds for recommendation or a representation towards a failed election in a certain electorate?

RK: The committee did consider that. However, we were very cautious about jumping to that conclusion. We wanted to in this time rely on basic reporting because if we felt if we passed that judgement without having given the Commission every opportunity to provide us with basic data, and I underline 'regular reporting' then we felt we would not be in a position to indeed make that judgement. It wasn't our call to make judgements per se. It was our call to look at quite obvious regularities, add some numbers together and then raise that in our recommendations to the Commissioner, but given the opportunity for the commission to come back as well and clarify, for example, if we had incorrect figures. This is why we felt that the role of the EAC, we felt if we continued in a situation where we're unable to get basic reporting, and declarations continued to be made, then the role of the committee would be in jeopardy; in addition to that of course, our own personal integrity, plus the integrity of the nominating bodies that nominated us. So we felt we had no alternative but to make a statement and a resignation.

JB: From what you were able to asses about this election so far, has anything gone right?

RK: Yeah, there has been pockets in PNG where it's gone very well. We had Transparency International and I've got access to other, international observers. In the New Guinea Islands for example, in parts of Southern region and Momase, it's gone well. But there are issues, yes. And predominantly anger about the common roll is consistent right around, even including in the New Guinea Islands where it (polling) was otherwise run quite well.

JB: What now? I mean that's it, effectively, for the EAC. There will be no recommendations taken on board.

RK: The commissioner has the final discretion. Where the Electoral Commission acting only on the recommendation of the

Electoral Advisory Committee and between the issue of writs and the declaration of results, and if the circumstances prevail in an electorate are such that proper conduct of an election in that electorate is not practical, the Electoral Commission may advise the head of state to withdraw that writ. This is where the ambivalence is. And I'm not a lawyer, Johnny, but where [the law] says acting only on the recommendation, does that mean the EAC is the only body that can make such a recommendation? Or can it be construed that because it's only a recommendation the power, which is also correct, the power actually lies with the Commissioner, so if there were issues, then he still can make that decision - if the prevailing circumstances were deemed such - to fail an election.