Fiji became the first Pacific Island country to qualify for the 2019 Rugby World Cup after beating Tonga 14-10 in Nuku'alofa at the weekend, with one direct passage to Japan still up for grabs.

The visitors trailed 10-3 with less than half an hour remaining at a sold-out Teufaiva Stadium before Leone Nakarawa dotted down and Ben Volavola slotted two penalty goals to secure a hard fought win. 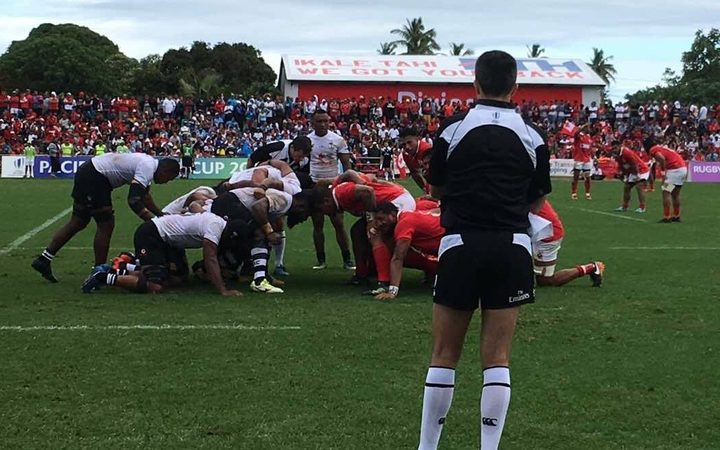 Tonga and Fiji square off in Nuku'alofa. Photo: Oceania Rugby

JOHN McKEE: Yeah, very pleasing to nail that one on the weekend and certainly it's been our goal for the whole campaign is to secure the Oceania number one spot and we managed to do that with the win on the weekend.

VINNIE WYLIE: Probably not occupying your immediate thoughts, but you're in Pool D with Australia, Wales, Georgia and either Canada of Uruguay, so something you can start planning towards now.

JM: Certainly yeah. You know we will focus on this week. The PNC is still up for grabs so we will need to get a win over Samoa to make sure we retain the Pacific Nations Cup. It's certainly is very pleasing now to be qualified to know what the pool draw looks like and start our planning. There's openly two years to go and it's very important that we utilise this time very well to build our squad and build all the support around. All-important 2019 Rugby World Cup and I think we can go out there with the goal of getting out of the pool stages and into the playoffs.

VW: Speaking of tough matches, it wasn't easy there at Teufaiva Stadium - 14 points to 10 nice and close there, a different atmosphere, a different experience playing Tonga in Tonga. How hard was that one for your team?

JM: Look, we always knew we were going to be in for a tough battle here, I don't think there'd ever be an easy win in Tonga, especially when the Ikale Tahi hadn't played at home for a number of years. You know they were highly motivated had a big support behind them... Players, you know, withstood the physical onslaught and at times played quite well in the game, and scored a nice try. The disappointing thing is we probably left a couple of opportunities on the field with turnovers at the wrong time. It was a very competitive game and there was a lot of ball movement surprisingly enough for the scoreline there was actually quite a lot of attacking play from both teams.

VW: The job is not done yet, you've got a game at Apia park this weekend against Samoa, they obviously want to get back into that number 2 spot and confirm there spot at the World Cup. Tonga, even though they're not playing are still currently second and can qualify if results go their way. And, of course, the Pacific Nations Cup for 2017 can still be won by all three countries.

JM: For us, you know we've got one focus now which is to try to win the Pacific Nations Cup against Samoa. Yeah a bit of pressure there around the Rugby World Cup qualification. So we know we're going to be in for another really, really tough battle there. It will be difficult to overcome the Samoan team. But I'm confident with the players we've got and that confidence we bring from the success from the campaign this far will leave us in a good place for a top performance next weekend.